Ten of the Best Motivational Speakers 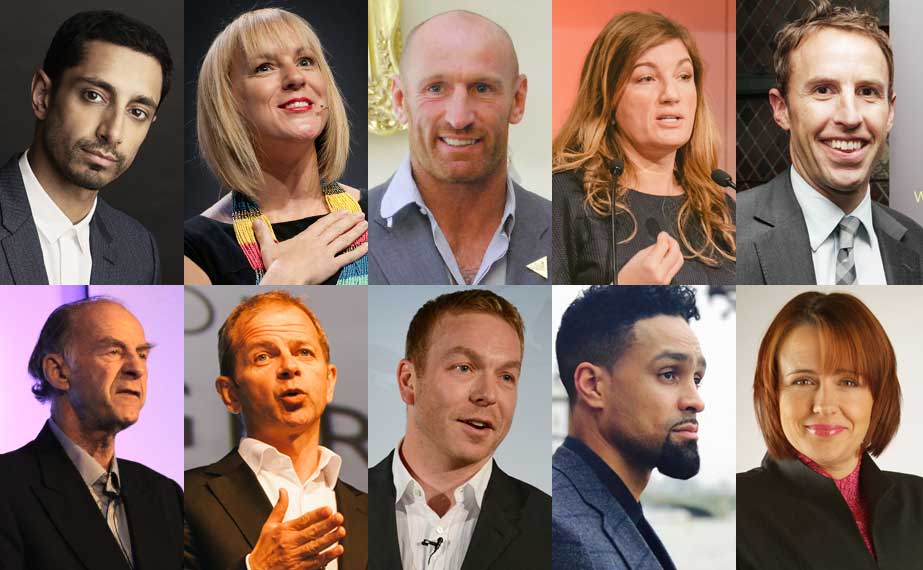 Entrepreneur and author Tony Robbins has built himself a reputation as one of the world’s best motivational speakers.

He, alongside names such as singer-to-political activist Sir Bob Geldof and survival expert and adventurer Bear Grylls, would be a predictable name on any list of best motivational speakers of all time. They are each currently among the elite of motivational speakers, who can command five or even six-figure fees.

However, our list features some personalities, who, whilst arguably lesser known, deliver the same transformational and powerful punch as their more high profile counterparts. Motivational magnets such as ‘Taming Tigers’ author Jim Lawless and Allan Leighton, the man who sold Asda to US retail giant Walmart for £6.7 billion.

For us at NMP Live, world-class motivational speakers come from all backgrounds, cultures, classes and industries. They are defined by their incredible achievements, relentless pursuit of goals and awe-inspiring resilience, from Olympic athletes to former hostages, tragedy survivors to business leaders.

What sets them apart is their ability to reflect on where they are and how they got there. Plus they can communicate all of that knowledge to an audience in a relatable way and have them hanging on every word.

Here are the top ten motivational speakers you should know about: 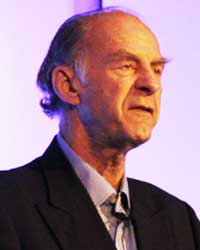 Sir Ranulph Fiennes’ place among the world’s best motivational speakers was secured long ago. Listed by The Guinness Book of Records as the World’s Greatest Living Explorer, Sir Ranulph has also been named by the Daily Telegraph as one of the world’s top ten speakers.

With a modest, humble and subtly humorous style, he weaves tales of his unique and treacherous expeditions into speeches that address themes relating to day-to-day challenges and the necessary qualities for success.

As a man who conquered the world’s most notorious mountains despite having vertigo, his repertoire covers and reaches well beyond overcoming challenges, teamwork, leadership and personal motivation.

One of the world’s greatest risk takers you may think, yet in an exclusive interview with NMP Live, Sir Ranulph told of the necessity to minimise risk for success in expeditions.

“Any risk that you take adds to the chances of failure so look at the risks other people have taken and avoid them,” he said.

The best motivational speakers do not only inspire, they also surprise.

Baroness Karren Brady – One of the most powerful businesswomen in Britain 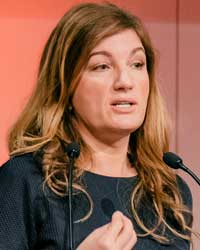 Baroness Karren Brady CBE is a highly sought-after, award-winning motivational speaker, who has appeared in more than 30 countries, addressing delegates from global businesses.

She is probably best known as ‘the first woman in football’ due to becoming Managing Director of Birmingham City FC at 23 years old and turning the club’s fortunes around. When the club launched on the Stock Market, valued at £25m, Karren was the youngest Managing Director of a PLC in the UK.

Her phenomenal business achievements have continued and Baroness Brady has been voted Business Woman of the Year, Ultimate Entrepreneur and included among the 50 most inspirational people in the world, among many accolades.

Fans of BBC One’s The Apprentice, where she appears on screen as Lord Sugar’s aide, will already be familiar with her direct, straight-talking nature and subtle wit.

Baroness Brady’s unsurpassed career allows her to speak with total authority on topics including entrepreneurial spirit, women in business and inspiring young people. 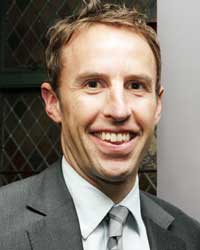 Gareth Southgate makes the list at this time not only due to his standout achievements particularly as England manager, but also as those achievements are still so topical in the wake of the 2018 FIFA World Cup in Russia and Nations League.

Gareth became the first England manager to reach the World Cup semi-finals in almost three decades and narrowly missed out on a place in the final - something the country’s team hasn’t done since it won the tournament in 1966.

Gareth also made more than 700 appearances in a playing career that saw him become captain of each of the three clubs he represented.

From the moment he took control of the England football team in 2016, Gareth had a clear vision, a goal, and a plan to change the perception of the team and turn them into winners.

To achieve World Cup semi-final success in Russia, Gareth made controversial decisions and took calculated risks by introducing a young team, two of whom had never previously played an England game and several who were very new to the squad. He didn’t deviate from his decisions despite much public scepticism - lessons corporations and organisations anywhere can learn from.

Whether you're the national football team, a FTSE 100 corporation or a regional SME, the fundamentals are the same; progress doesn't happen by standing still. 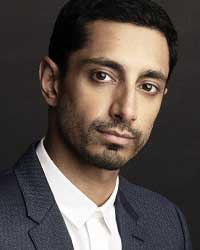 British-born Riz Ahmed encapsulated just a little of what he has to offer as a great motivational speaker in an interview with Time.com.

“When I first got to Oxford University I felt like a fish out of water. The first person I spoke to laughed in my face and told me I reminded them of Ali G,” he said. “I stuck out there.”

Later he added: “We need to stop talking about diversity and start talking about representation. Everyone wants to feel seen and heard and valued.”

Riz garnered viral attention for his essay in ‘The Good Immigrant’ and his speech on fair representation at the House of Commons. He is an inspiration to a whole generation, not least those with black, Asian and minority ethnic heritage. 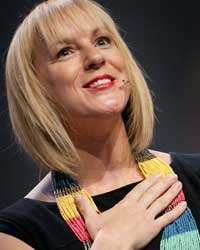 Media worldwide were captivated by 5ft 5” adventurer Debra Searle’s story when she chose to continue her Atlantic crossing after her husband, a 6ft 5” experienced oarsman, developed a fear of the ocean and had to leave the boat.

The 3000 mile journey that had been intended to take 6 weeks ended up taking 3 ½ months. She battled 30-foot waves, force 8 winds and sharks.

Debra, also a successful business woman, has a contagious positivity and endearing modesty. She has spoken at more than 1000 events across 38 countries as well as presenting more than 40 programmes for the BBC.

She uses her story to powerfully draw out key business and interpersonal lessons.

Comments in testimonials submitted following her speaking engagements have included: “Best motivational speaker I’ve heard at conference, ahead of Neil Armstrong, Carl Lewis, Ellen McArthur, Steve Redgrave to name a few” as well as “The time taken by Debra to understand our business really paid off.” 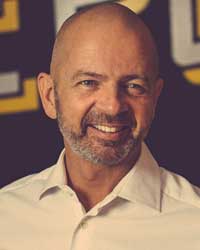 Clients are delighted by the energy, inspiration and humour Jim Lawless brings to motivational speaking engagements.

The author of the bestselling book ‘Taming Tigers’, Jim is one of the most sought after motivational speakers in the world today. He has proven his techniques not only in business but in high-risk sporting achievements, even putting his life on the line.

To test his ‘Taming Tigers’ theory around mental toughness, Jim became Britain’s Deepest Freediver - diving below 100m on a single breath. In response to a ‘put your money where your mouth is’ style challenge from an audience member, he also became a jockey aged 36, in only 12 months. At the outset, he was three stone (20kg) too heavy and could not ride a horse.

Not only a contender for best business motivational speakers, Jim makes the list of all-round ‘10 best motivational speakers’ thanks to his achievements, knowledge and insight as well as his attention to detail in hitting a brief and the practical advice he leaves behind. 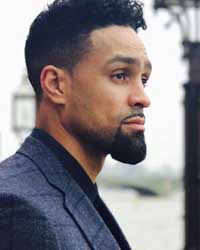 Ashley Banjo is the choreographer and creator of one of the most successful ever Britain’s Got Talent winning acts - the dance group Diversity.

Diversity won the show in 2009 in front of more than 20 million television viewers and, under Ashley’s exceptional leadership, have gone on to have enduring success, with annual tours and continued TV appearances. The group’s motto is ‘Dream, Believe, Achieve.’

Ashley has an ability to innovate and keep the group fresh, united, relevant and current - lessons so many different organisation and business audiences have learned from.

Additionally, Ashley has gone on to make a name for himself as a TV presenter, judge and celebrity in his own right.

His talks include themes of leadership, talent management, innovation and creativity.

In an exclusive interview with NMP Live, Ashley reflected on his thoughts in the run-up to Diversity’s Britain’s Got Talent win.

“I really just lived in the moment of what I was doing and wanted that particular performance to be right,” he said. “I really did just take it in steps.” - a strategy for success. 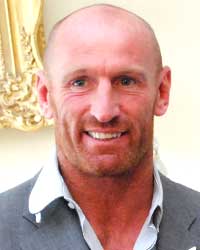 “I don’t want to be known as a gay rugby player,” Gareth Thomas has said. “I am a rugby player and, first and foremost, I am a man.”

Another absolute contender for best sport motivational speaker, Wales’ most-capped rugby player (and one of the highest try scorers in the world) Gareth has broken new ground in the sport in a multitude of ways. His messages also reach way beyond the sports field.

He is a proud ambassador for lesbian, gay, bisexual, transsexual and intersex individuals and wants to help lead in a transformation that will make sexual orientation a non-issue.

In December 2009, when he came out, he was the only openly gay high profile sportsman in the UK. The following year he was voted top of the Pink List 101 Most Influential Gay People.

Gareth captivates with heartfelt speeches about his impressive sporting career and specific struggles in coming to terms with his sexuality. He delivers messages with a sincerity, eloquence and frankness that is compelling. 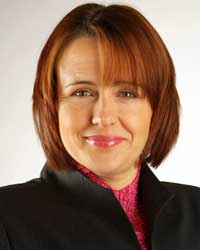 Born with spina bifida, Tanni Grey-Thompson is Britain’s best-known Paralympic athlete. She has won 14 Paralympic medals and many international sporting awards, as well as being a BBC Sports Personality of the Year.

Baroness Grey-Thompson is an exceptional motivational speaker and skilled at relating her experiences to topical issues and providing tailored speeches. She understands and can convey the crossover between high-performance sport and top-tier business.

Her lively personality and down-to-earth humour shine through.

Just one of the impeccable testimonials given following her talks said: “Tanni was so easy to work with and accommodating of our needs. What we also loved was how humble she was given her super achievements and peerage.” 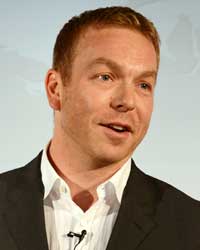 When you think of Sir Chris Hoy you are likely to think of his sporting achievements, but he may also be considered among the best business motivational speakers.

In his business addresses he talks through the marginal gains strategy which he credits for much of his Olympic success. Based on the proven theory that marginally optimising every possible area for improvement will result in profound progress, it’s a very translatable strategy.

Testimonials to Sir Chris’s inspiring speech delivery often refer to his humble demeanour and ability to translate his experiences to be relevant from a business, sporting or personal perspective.