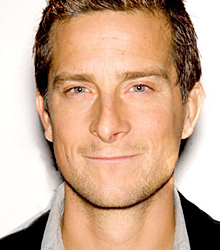 Bear Grylls has become known around the world as one of the most recognised faces of survival and outdoor adventure. His journey to this acclaim started in the UK on the Isle of Wight, where his late father taught him to climb and sail.

Trained from a young age in martial arts, Bear went on to spend three years as a soldier in the British Special Forces, serving with 21 SAS Regiment. It was here that he perfected many of the survival skills that his fans all over the world enjoy watching him pit against the worst of mother-nature.

Despite a free-fall parachuting accident in Africa, where he broke his back in three places, and after enduring months in military rehabilitation, Bear went on to become one of the youngest ever climbers to reach the summit of Mount Everest, which he achieved on May 26th, 1998, at only 23 years old. The actual ascent of Everest took ninety days enduring extreme weather, two months of limited sleep and running out of oxygen in the upper regions of the 'death zone' (above 26,000 feet).

Bear joins a small elite number of British climbers to have successfully completed climbing Everest and return alive. Every year the death toll on Mount Everest rises, for every six mountaineers who make it to the top, one will die.

On the way down from his first reconnaissance climb, Bear cheated death navigating the perilous Khumbu Icefall, the ice cracked and he fell into a crevasse that was 1,000 feet deep, was knocked unconscious and had it not been for the tenacity of his team mates he would not be alive today.

In 2003, Bear Grylls led the first crew to cross the Atlantic via the Arctic Circle in an open rigid inflatable boat, in aid of The Prince's Trust. This expedition was the subject of 'Facing The Frozen Ocean' which was published in 2004.

Bear has also hosted over six seasons of the BAFTA award-winning Channel 4 series, The Island with Bear Grylls, as well as the Emmy Award nominated series Hostile Planet for National Geographic and "You Vs Wild" for Netflix. Born Survivor, which has become one of the most watched shows on the planet, reached an estimated 1.2 billion viewers.

Off-screen, Bear Grylls has led record-breaking expeditions, from Antarctica to the Arctic, which in turn have raised over $2.5 million for children around the world. In recognition for his expertise and service, Bear Grylls was appointed as the youngest ever Chief Scout to over half a million scouts in the UK, was awarded an honorary commission as a Lieutenant-Commander in the Royal Navy and as a Lieutenant-Colonel in the notoriously tough Royal Marines Commandos.

He has authored 15 books, including the No 1 Bestseller: Mud Sweat & Tears which was voted the most influential book in China (2012) and spent 15 weeks at Number 1 in the Sunday Times Bestseller list. Other titles include: Your Life; Train For It, True Grit, A Survival Guide For Life, Born Survivor, Living Wild, Great Outdoor Adventures, Facing Up, Facing the Frozen Ocean, To My Sons and seven children’s fiction novels titled Mission: Survival.

As a keen environmentalist, Bear Grylls led the first team to Jet Ski around Britain testing a pioneering new fuel made from rubbish and owns a nature reserve on an island, off the Welsh coast. When he is not on his island, Bear lives on a houseboat in London with his wife and children.

In 2019, Bear was awarded and OBE for services to young people, the media and charity in the Queen’s Birthday Honours list.

The key themes of Bear's talks are teamwork, leadership, operating under pressure, resilience, overcoming adversity and going the extra mile.

In his keynote, Bear Grylls will talk about the four things that have shaped him and the lessons he's learnt along the way. Through his presentation, he will guide the audience on a journey to understand how to overcome challenges and adversity and to learn from failures.

His stories of resilience, courage and never giving up will inspire and empower the audience to not only survive but also to thrive in these tough times.

His presentation was the highlight of the conference, it was exceptionally inspirational!

He was Awesome. So genuine, humble, and really funny! Our employees are raving about it.

Bear and President Obama made for such a fun, interesting and dynamic combination for our SAP global audience - and Bear’s message about resilience was incredibly powerful.

With trademark energy and enthusiasm, Bear scaled breathtaking new heights with BT Global Services' virtual Sales Kick-Off, helping to empower an entire Banking & Finance division with true-grit determination to strike out for new horizons, ready to embrace failure and become more resilient to grow and succeed in these changing and uncertain times.Unleashed, Bear grappled with every discussion topic with charm, clarity, passion and good humour, inspiring his audience around the world to believe in themselves and go beyond limits. BT would like to thank Bear for well and truly taking this virtual event within sight of the summit.

Bear was simply the perfect choice to join us and talk about why 'experience matters' at our annual kick off meeting in Barcelona. Bear brought energy, insight and was highly relatable for our entire audience who joined us from across Europe. His stories and approach to life left my teams feeling empowered and motivated, we all took something away from his presence and contribution. To top it off, he was highly engaged and approachable throughout our full interaction – both on and off stage. His team mirrored his enthusiasm and I look forward to working with Bear and the whole Bear Grylls Ventures team again in the future.

Bear Grylls captivated our audience with his real-life story of determination and human spirit. His simple advice to 'never give up' really hit home with our group. We had three outstanding keynote speakers this year, but only Bear received a standing ovation!

Resilience, resilience, resilience - this is what it takes to never give up and this is what Bear brought to the stage impressively and authentically at Switzerland's most important annual economic forum. His personality, his charisma and his enthusiasm inspired and thrilled the audience. The co-operation with his whole team was always pleasant and professional.

...you said on one of our calls that Bear’s message was very heartfelt and that’s so true. He was warm, humble, inspiring and everything we could ask for in a keynote speaker.

Clients often ask about purchasing books for giveaways and delegate packs. Below you’ll find a selection of products by Bear Grylls OBE. Click the images to view on Amazon's website. For bulk orders, please speak with your Booking Agent.

How to book Bear Grylls OBE for your event