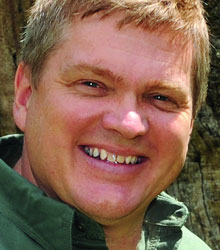 Over the past two decades the name Ray Mears has become recognised throughout the world as being an authority on the subject of Bushcraft and Survival. He has also become a household name through his television series: Tracks, World of Survival, The Essential Guide to Rocks, Extreme Survival, Trips Money Can't Buy with Ewan McGregor, The Real Heroes of Telemark, Bushcraft Survival, and Wild Food.

These programmes have reached out and touched the hearts of everyone, from small children to grandparents. They are enjoyed by many because of Ray's down to earth approach, his obvious love for his subject and the empathy and respect he shows for indigenous peoples and their cultures.

It is obvious to some and a surprise to others to discover that Ray has spent his life learning these skills and is truly a master of the subject he calls Wilderness Bushcraft.

Ray Mears grew up in Southern England on the North Downs, where he discovered a countryside abundant with wildlife. Developing a unique attunement to his local environment, he learned to track foxes into the forest, never realising that he was embarking on a journey that would become his life's mission. Wanting to be able to sleep out on the trail yet unable to afford camping equipment, he resorted to a more Robinson Crusoe approach to solving the problem.

It was his school judo teacher Kingsley who fired his imagination and encouraged him to look at the world in a different way. Ray found Kingsley to be a wonderful man. He had fought behind enemy lines in Burma during the Second World War, and taught Ray to challenge conventional wisdom and practices. "You don't need equipment, you need knowledge to survive in the wild", he would tell him. "Maximum efficiency from minimum effort", was another of his themes. These simple principles have been enshrined in Ray's Bushcraft philosophy, in both his writing and his teaching.

Digesting every scrap of information relating to survival that he could find in his local library, Ray soon began to learn skills that had not been employed on the North Downs for perhaps as long as ten thousand years.

Since those early days Ray has expanded his horizons, literally travelling the World many times over. Conversing in the universal language of Bushcraft, he has won the friendship of many of the Earth's first Nations, and has been privileged enough to accompany them while hunting, tracking, and searching for wild plants for food and medicine.

Bushcraft liberates and empowers. It reacquaints man with nature and his roots and provides an escape from the shackles of modern life. Bushcraft is about being practical and resourceful. Rather than teach ten things Ray prefers to teach one which can be put to use in a wide variety of environments.

Ray Mears is perhaps the foremost expert in his field - most certainly the most well travelled; yet people are often surprised to see him rolling up his sleeves and getting stuck in with those that are enjoying Bushcraft for the first time.

Nothing pleases him more than to see a student reaching beyond their own expectation of themselves, challenging their own beliefs about the world around them as they see it anew through the eyes of Bushcraft, what Ray calls, "The art of the possible".

Ray Mears is a highly sought-after and popular speaker at corporate and private events, renown for teaching but not preaching. Quietly spoken, he is recognised worldwide as a true master of the outdoors.

Having spent the majority of his life learning to be at home in places others describe as hostile, Ray has unparalleled experience and in-depth knowledge. He encourages people to open their eyes and see for themselves, to enjoy their own personal sense of wonder and discovery. He is merely a guide, passing on his knowledge.

It is this that enables Ray Mears to design, develop and present exciting pre-dinner speeches and interactive workshops. He continues to work tirelessly to share his understanding so that others may "drink from the well of bushcraft".

Preferring to adopt a 'pre-dinner' rather than after dinner style of speaking, Ray is highly engaging, humorous and leaves his audience both inspired and motivated.

Clients often ask about purchasing books for giveaways and delegate packs. Below you’ll find a selection of products by Ray Mears. Click the images to view on Amazon's website. For bulk orders, please speak with your Booking Agent.

How to book Ray Mears for your event