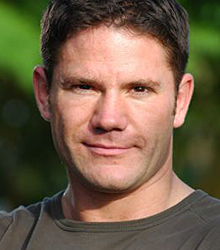 Steve Backshall is one of TV's best-known wildlife presenters and was a huge hit on BBC1's Lost Land of the Jaguar, for which he scaled a previously unexplored peak to search for new species in the jungles of Guyana.

Steve and his team made a near-death ascent of Mount Upuigma, scaling vertical rock walls as high as the Empire State Building, sleeping suspended in space. In this gripping series the team achieved their mission to find rare and undiscovered species of wildlife to prove that the Guyanan jungle needs to be protected.

Ironically, after arriving safely back in the UK, Steve unfortunately fell 10 metres from a cliff face in the Wye Valley, breaking his back and shattering his foot. Steve's latest presentations feature his extraordinary adventure into the lost Guyanan jungle, the urgent conservation issues his journey has raised and the thought-provoking lessons he's learnt from his accident.

As a TV presenter, naturalist and adventurer, Steve has travelled the globe in search of the wild, weird and wonderful. BBC programmes include some closer to home expeditions for the ever-popular The One Show, Britain's Lost World, Extreme Caving, CBBC Spring Watch, Inside Out and The Nature of Britain.

Explorations further afield include the BBC's gruelling and Emmy-nominated epic Expedition Borneo, where Steve made the first ascent of a jungle peak, and first descent into an enormous, unexplored sinkhole; Expedition Alaska, Secret Wilderness: Japan where he met giant salamanders and feisty Macaque monkeys.

As an author Steve Backshall has written Steve Backshall's Venom, The Rough Guide to: Indonesia, Southeast Asia and First-time Asia, as well as the Adventurer's Guide to Wildlife and Adventurer in Residence. He regularly writes articles for a variety of newspapers and magazines including the National Geographic Traveller Magazine.

Steve is Vice President for both The Wildlife Trusts and Buglife, and a patron for The Wildfowl & Wetlands Trust, London Wildaid and The Exotic Pet Refuge.

Steve Backshall is an inspirational public speaker on a range of wildlife-related issues, conservation topics, exploration and adventure. He is a popular choice to host zoological events, for lunch and after dinner speeches and to launch wildlife and science festivals.

His fascinating experiences along with his warm presentation style combine to make an engaging and entertaining event for all types of audience from business to educational.

Expedition: Voyages to Undiscovered Places
Inspired by his BBC series, ‘Undiscovered Worlds with Steve Backshall’ and ‘Expedition with Steve Backshall’ for UKTV, Steve’s talk encompasses astonishing tales from a year of adventure; taking light into forgotten caves, making first ascents of Arctic peaks, and first descents of Himalayan rivers - he talks of narrow escapes and scrapes plus jaw dropping tales of close calls with near certain death as well as lessons learned from his extraordinary year.

Wellness
A talk about the lessons Steve has learned from studying our ancestors, animals, hunter gatherers today, and living life on expedition. What timeless needs and resources can do for all of us in our modern day search for wellbeing.

Climate
Our changing world and our place in it.

Shark
The world’s greatest predator in its place

Deadly
Predators big and small and how they function.

Steve Backshall gave an excellent talk that had us all enthralled from the start. He provided the perfect blend of career highlights interspersed with personal memories from his childhood. We didn't want it to end but when it did he generously gave his time to allow photos and 'selfies' with his many fans

Clients often ask about purchasing books for giveaways and delegate packs. Below you’ll find a selection of products by Steve Backshall. Click the images to view on Amazon's website. For bulk orders, please speak with your Booking Agent.

How to book Steve Backshall for your event