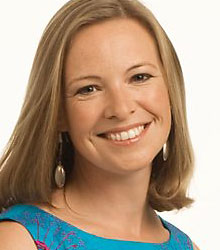 Miranda Krestovnikoff is one of the UK's busiest and best-known factual programme presenters, known for her work on BBC2's BAFTA award-winning show Coast. As a biologist, trained diver and one of the original members of the Coast team, she has explored Great Britain's shoreline from top to toe, revealing fascinating tales of marine life.

Miranda is a resident wildlife expert on BBC One's The One Show, having presented natural history stories, ranging from robotic ants to rare dolphins, from all around the country for the last six years. She is also a regular on BBC One's Inside Out.

Other television credits include BBC Two's Big British Wildlife Revival and guest appearances on Ready Steady Cook and Celebrity Masterchef. As a lover of classical music and accomplished musician herself, Miranda was chosen to co-present the BBC Proms in 2010.

Miranda is also busy on radio with contributions to BBC Radio 4's Costing the Earth, Living World and Tweet of the Day. She regularly writes articles on tourism and leisure for national newspapers and magazines and is the author of two books, Miranda Krestovnikoff's Best British Beaches and Scuba Diving.

Miranda is currently President of the Royal Society for the Protection of Birds, Patron of Whale and Dolphin Conservation, Patron of Alderney Wildlife Trust, Founding Friend of the Canal & River Trust and heavily involved with other charities including The National Trust, The Wildfowl & Wetlands Trust, The Marine Conservation Society and Sustrans.

A Whistle Stop Tour around the Coast Miranda takes the audience around the UK coastline starting from her home in Bristol - around the Welsh coast, across to Northern and Southern Ireland, the Western Isles and Scotland, down the east coast and back along the south coast, before returning back home safe and dry! This tour takes in some of the best stories she has filmed for the BBC series "COAST" and "The One Show" and Channel Four's "Wreck Detectives". She gives a behind the scenes view on how some of the items are filmed and what happens when it all goes wrong!

"Avian Antics” - my passion for birds.  President of RSPB and "Tweet of the Day" regular, Miranda shares her passion for her feathered friends - unusual tips for encouraging birds into your garden and amusing anecdotes from many years of filming birds in the UK for COAST and The One Show. Miranda shares the trials and tribulations of being dive bombed by gannets, trying to sing a duet with a wren and getting special access to a prison to film some of our rarest species of birds.

A consummate public speaker, Miranda Krestovnikoff's after dinner speeches and keynote presentations focus on her experiences of diving, wildlife and filming, as well as her involvement in environmental issues.

Her background in zoology, along with her wildlife experiences underwater as well as on land, make her ideal for many types of events from the highly commercial to the educational.

Miranda’s enthusiastic style and extensive knowledge of wildlife, diving, conservation and environmental issues make her a popular choice as host and guest speaker for a variety of organisations including the National Geographical Society, the Royal Scottish Geographical Society and the UK and Scottish Dive shows.

She enjoys motivating young people to share her love for nature and the environment, visiting schools, universities and clubs. She hosted the London launch of Love your National Parks.

We thoroughly enjoyed welcoming Miranda as Guest of Honour at Speech Day. Her warm and engaging approach was popular with prize-winners and their families and her address combined scientific insight, humour, humility and inspiration for our audience of pupils, parents and staff

Clients often ask about purchasing books for giveaways and delegate packs. Below you’ll find a selection of products by Miranda Krestovnikoff. Click the images to view on Amazon's website. For bulk orders, please speak with your Booking Agent.

How to book Miranda Krestovnikoff for your event

To book Miranda Krestovnikoff, please submit an online enquiry, email bookings@nmp.co.uk or speak with one of our booking agents on +44 (0)1372 361 004.