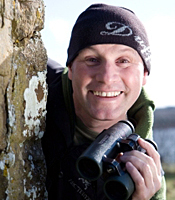 With a background in biological research in Ecuador, Vietnam & Tanzania, Mike Dilger has contributed to a wealth of natural history programmes.

On-screen, Mike has written and presented Channel Five's Britain's Wild Invaders, The Natural History of Christmas and Wildlife Uncovered:UK, as well as his own BBC Radio 4 series Wild Underground and Extreme Britain.

Recently, he has presented the BBC's Nature's Calendar, Hands on Nature, Springwatch with Bill Oddie and Britain Goes Wild. Mike worked on CBeebies Autumnwatch and went on to do CBeebies Springwatch, in addition to making regular appearances for Points West and Inside Out.

Mike Dilger also contributes articles to various magazines and has co-written his first book to tie in with the BBC Nature's Calendar series.

Clients often ask about purchasing books for giveaways and delegate packs. Below you’ll find a selection of products by Mike Dilger. Click the images to view on Amazon's website. For bulk orders, please speak with your Booking Agent.

How to book Mike Dilger for your event