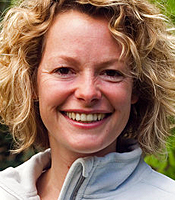 Kate Humble was born in Wimbledon, south London. She grew up in Berkshire next door to a farm, learned to ride at the age of 5 and spent most of her early years mucking out horses.

Kate left school with 'A' levels in English, History and Latin, and decided that travelling to Africa would be more beneficial than going to university. In 1988, aged 19 and with just £800 in her pocket, Kate set off for South Africa. Over the next year she worked as a (very bad) waitress, on a crocodile farm in Zambia, and as a truck driver for a safari company. By the summer of 1989, having crossed the entire African continent, she reached Cairo with £5 and no ticket home.

In 1989, Kate got her first break in television – as a tea-maker and typist at a company that made corporate videos. Over the next few years she worked her way up to becoming a production assistant, then researcher, assistant producer and director.

In 1997 Kate Humble joined the BBC as a senior researcher on Animal Hospital, presented by Rolf Harris. Her travel and writing experience saw her move to the Holiday programme, where, on her second day in the office, she was asked to do a screen test. Within 2 weeks, Kate was presenting her first Holiday report, from a barge holiday on a French canal in driving rain and thick fog!

Kate was a hit, and the producers decided to give her a slot within the main Holiday programme – Humble Holidays featured holidays under £300, and was made on a shoestring budget. It was while filming one of the Humble Holiday slots that Kate tried her hand at something which has become a hugely important part of both her working and private life – at Porthkerris Divers in Cornwall she learned to SCUBA dive.

In 2000, Kate presented a brand new series, Rough Science, in which a group of hard-nut scientists were plonked in the middle of nowhere all round the world, and given a series of complex scientific tasks to accomplish using only the most basic of materials. This was such a success that the team went on to make a total of six series. Around this time, Kate also presented Tomorrow's World with Adam Hart-Davis, Top Gear with Quentin Willson, City Hospital with Matthew Kelly, as well as The Essential Guide to Rocks with Ray Mears, and was a regular contributor to Country File.

In 2002, Kate Humble paired up with bird-watching ex-Goodie Bill Oddie and wildlife cameraman Simon King, to do a week of live wildlife programmes from gardens in Bristol. Wild In Your Garden was followed by Britain Goes Wild, which in 2004 became Springwatch. Springwatch has now run for many years, become a huge success, regularly getting between 3-4 million viewers a night. In 2006, the trio joined forces again for the first Autumnwatch.

in 2009 Kate was joined by Chris Packham on Springwatch. She also travelled to Ireland to film her second series of One Man and His Dog. And in 2010 we had one of the coldest, toughest winters for over 30 years. Kate, Chris and the Springwatch team answered viewers concerns about how our wildlife was coping with a one-off special - Snow Watch.

Clients often ask about purchasing books for giveaways and delegate packs. Below you’ll find a selection of products by Kate Humble. Click the images to view on Amazon's website. For bulk orders, please speak with your Booking Agent.

How to book Kate Humble for your event