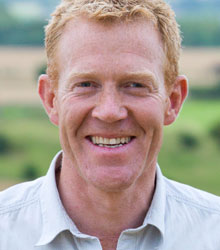 Adam Henson is perhaps the best-known farmer in the UK, presenting his own section on BBC’s Countryfile to millions of viewers every Sunday evening. However, farming and conservation are Adam’s first passions and when the camera stops rolling, there is still lots of work to be done.

Born on the farm where he now works in Gloucestershire, Adam gained a HND in Agriculture at Seale-Hayne Agricultural College in Newton Abbott, Devon, where he meet his business partner and friend Duncan Andrews. After graduation, the pair travelled for over a year through Australia working on sheep and arable stations, then a kiwi plantation in New Zealand, before returning to plant tea in the Atherton Tablelands in Queensland. After diving on the Great Barrier Reef, they returned via California and Canada.

Adam broke into television during 2001 when, chosen from over 3500 applicants, he was successful in gaining a presenting position on the BBC's Countryfile programme after it ran a nationwide presenter search. Then, in 2013, Adam teamed up with celebrity chef Nigel Slater to co-present Nigel and Adam’s Farm Kitchen, a four-part series exploring how food gets from farm to fork, and how to make the most of seasonal produce.

He filmed three series for BBC Lambing Live alongside Kate Humble, the third series of which aired in spring 2014. Each series featured a year in the life of a sheep farmer with half of the programme live from the lambing shed based on the farm. Live television for Adam was fairly terrifying but thankfully Kate is a true professional and mentored him throughout. The programme was very well received by both the general public and sheep farmers, giving a true reflection of the trials, tribulations and joys of running a sheep flock.

In 2015 Adam Henson then presented a new series of BBC1’s Secret Britain with Ellie Harrison. This 3-part series discovered the Water World of Wales, the Mysterious Moors of Yorkshire and The Hidden Highland of Scotland. He’s also presented on Countryfile Summer Diaries, Big Wildlife Revival, BBC2’s Coast and Inside Out. Adam also writes a monthly column in Countryfile magazine, as their resident farmer, and the Cotswold Life magazine.

Adam Henson truly believes that being a farmer is the best job in the world and he’s happy to enlighten audiences as to why, wherever he speaks. As a practical farmer, with a diverse business, he has developed a good knowledge of British farming and is frequently asked to speak at a wide variety of public events, shows, festivals and corporate conferences.

Adam finds himself talking in front of large audiences on a fairly regular basis, giving talks about his life as a farmer and working in the media. Audiences are as varied as Rotary groups and ladies from the WI to agricultural and industry groups and corporate bookers from entirely different industry sectors, wanting to hear Adam’s story and drawing on the business parallels between their world and his.

He has also been asked to chair debates, panel discussions and round tables, open buildings and attend other ribbon-cutting red carpet events, host industry award ceremonies, judge competitions and cook on-stage at The Big Feastival with Jamie Oliver.

Gloucestershire County Council recently asked Adam to present some prizes in our County-wide Schools competition. We were very pleased by Adam's presentation. Adam's animated talk and obvious love for his farm work enthused the teachers and children. He delivered our message very well for us and we would certainly consider using him again. Thanks Adam!

We would like to thank Adam for his excellent and very entertaining speech. Delegates very much enjoyed hearing about his experiences throughout his career, both on the farm and in the media, as well as his insight into the importance of children truly understanding good food and its production.

Clients often ask about purchasing books for giveaways and delegate packs. Below you’ll find a selection of products by Adam Henson. Click the images to view on Amazon's website. For bulk orders, please speak with your Booking Agent.

How to book Adam Henson for your event