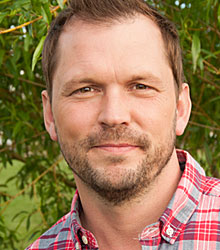 Jimmy Doherty has always been passionate about nature, farming and the wonderful British countryside. By the time he was 16, he was the youngest ever Assistant Entomologist at the Mole Hall Wildlife Park in Walden.

Jimmy first came to national media attention via the fly on the wall TV series, Jimmy’s Farm. Airing on BBC as far back as 2004, the series followed farm life and the events unfolding on the farm. Follow up series followed on BBC and with Channel 4, the recent series including Food unwrapped, Builds on Wheels, Jamie and Jimmy’s Friday Night Feast – with childhood friend and lifelong pal Jamie Oliver — plus, more recently, Big Bee Rescue.

Born in Essex, after gaining a degree in Zoology, Jimmy worked at the Entomology Department at London's Natural History Museum before moving on to Coventry University where gained a PhD in Entomology (the study of insects), set up an insect laboratory and taught Animal Ecology and Animal Philosophy to undergraduate students.

However, his dreams were beyond the microscope, with a vision of producing his own food and being self-sufficient… a dream born out of a childhood helping out on a small holding with cows and sheep.

So Jimmy trained as a pig farmer, where in 2002 he met his future wife, television runner Michaela Furney, when Channel 4's filming for Jamie's Kitchen took her to the Cumbrian farm where he was working.

In 2003, Jimmy decided it was time to make his dream of living the good life a reality. After spending six months, travelling the length and breadth of the UK, he found what he was looking for, a farm with potential – actually, a 100 acre old dairy farm that had stood empty for nearly 50 years. Totally derelict and overgrown it may have been, but it was the beginning of an exciting adventure.

Without any experience or knowledge of farming, he took on a leasehold and started The Essex Pig Company utilising free-range meat production practices. Based around various rare breeds, the core breed of pig is the endangered Essex, together with the Berkshire, Gloucester Old Spot, large and middle Whites; Soay and Jacob sheep and Red Poll cattle.

Jimmy's roller coaster journey to change this derelict farm into a rare breed pig farm was followed by two series of a fly-on-the-wall documentary, Jimmy's Farm (2004-06), which aired on BBC2. This was followed with Jimmy's Farm Diaries (2007) and Crisis on Jimmy's Farm (2007). Jimmy is a strong proponent of traditional farming methods and a more natural and sustainable way of life.

After years of hard work, the working farm, farm shop and butchery, are now also home to a Wildlife Park, Restaurant, vegetable and flower gardens, and clothing, gift & craft shops. Sustainable farming and quality meat and food production remains at the heart of everything at Jimmy’s Farm.

Following the success of this series, Jimmy presented a programme for BBC2 called Jimmy Doherty's Farming Heroes which aired in 2008, followed by various other series and one-off documentaries for the BBC. In 2009 he presented a six-part documentary Jimmy's Food Factory for BBC1, in which he demonstrated the industrial techniques used in the production of processed foods for supermarkets. A Farmer's Life for Me, was broadcast in spring 2011.

Jimmy has written two books, On the Farm, his story of setting up the Suffolk pig farm, and A Taste of the Country which has recipes for traditional British farmhouse dishes. He also has a number of food products called Jimmy's Range which include a range of condiments and a very successful range of sausages on sale in Tesco.

After many years breeding rare breeds, Jimmy became the President of the Rare Breeds Survival Trust in 2016, becoming their youngest President to date. In 2020, Jimmy shared his life long passion for insects in the Big Bee Rescue on Channel 4… aiming to inspire protection of the nations bee population.

When able to take time away from his farming commitments, Jimmy Doherty is available for personal appearances, corporate and after-dinner speaking engagements through a moderated Q&A or ‘fireside chat’.

Clients often ask about purchasing books for giveaways and delegate packs. Below you’ll find a selection of products by Jimmy Doherty. Click the images to view on Amazon's website. For bulk orders, please speak with your Booking Agent.

How to book Jimmy Doherty for your event