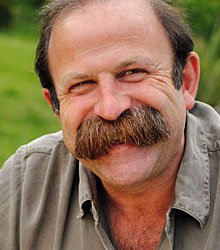 Dick Strawbridge was born in Burma and is the third of seven children. He was raised and educated in County Antrim, Northern Ireland.   He attended the Royal Military Academy Sandhurst and in 1978 Dick joined the Army, completing a degree in electrical engineering. Over the next 20 years he rose from Troop Commander to Lieutenant Colonel, and enjoyed serving in the army (and playing rugby) all over the world. He was awarded an MBE for distinguished service in Northern Ireland.  Whilst he was still serving in the Army, Dick's family persuaded him to audition for Channel 4's Scrapheap Challenge. His leadership abilities, personality and engineering skills, (and possibly because he had the biggest moustache the series producers had ever seen) secured him the job. Dick was in all 10 series of the show - first as a team captain, then as a contestant and finally as a presenter.  In 2001, Dick Strawbridge left the army and began a career in industry. He also ran leadership and teamwork courses, and began giving lectures to schools and colleges.   He then went on to present Crafty Tricks of War, BBC 2. In this series, Dick celebrated British ingenuity and demonstrated his practical skills by reconstructing and testing some of the most unusual inventions of war.  Following this Dick was part of the production, Geronimo, BBC 2, co-presenting with Fearne Cotton. Dick again demonstrated his extensive technical knowledge, as he challenged some of the great British public to build some of the craziest machines seen on television.   In 2006, Dick and his family made a life changing move from The Malverns to Cornwall to a small holding that they restored and set about running sustainably. This ecological move was filmed and became the BBC 2 series, It's Not Easy Being Green. In the 2nd and 3rd series Dick, and his son James, worked with members of the public on ecological projects across the UK.   Throughout the years Dick has presented a number of other shows, Saturday Farm (ITV), The Great Flying Challenge (BBC1) and The Biggest Little Railway in the World (Channel 4) to name a few.  In 2010, Dick took part in Celebrity Masterchef and did phenomenally well, making it to the final with Christine Hamilton and Lisa Faulkner. Lisa won, but Dick and Christine made their mark!  He then appeared in The Hungry Sailors, which played out across 20 hours on ITV Daytime. It showed Dick and his son James back together on screen. Both equally self-sufficient, Dick and James set sail aboard pilot cutter the Amelie Rose to explore the food of Britain's coastal towns. Mooring in tiny harbours and busy ports they met farmers, fishermen, producers and foragers, gathering fantastic local produce and heading back onboard to cook up a number of fabulous dishes in their galley kitchen. It was a coastal, culinary and critical triumph!

Dick currently stars alongside his wife Angel in the award-winning Escape to the Chateau (Channel 4) and the equally popular spin-off series Escape to the Chateau: DIY. In Escape to the Chateau we watch the couple transform a 19th Century French Chateau to its former glory. Dick and Angel host multiple events at the splendid venue throughout the year, including weddings, team building events and French food weekends.

Dick Strawbridge is a witty, warm, entertaining and knowledgeable speaker. As an engineering, technological and environmental expert, he offers a varied, fascinating and impassioned insight into many different topics including British innovation, food, travel, leadership and teamwork.

As one might gather from looking at Dick's television career - he loves to meet a challenge head-on and is therefore an excellent motivational speaker.

Dick gives talks on British innovation, leadership and teamwork, lectures at schools and colleges, and makes keynote and after dinner speeches. He also hosts conferences and similar corporate events.

He has recently given talks to a range of clients including Rolls Royce, BAE Systems, The British Council, The National Trust, Siemens, and The RSPB.

All I can say is LIFE MADE! We had the best day ever yesterday, Dick and Angel were fabulous! We enjoyed every second with them.

He was extremely friendly to everyone he met - and came across brilliantly. He is exactly how you see him on TV - we were delighted!

Very personable and willing to spend time with the crowds doing the meet-and-greet. Top notch.

Dick was an absolute delight. He really threw himself into the festival and people couldn’t get enough of him. Would love to get him along again next year!

Clients often ask about purchasing books for giveaways and delegate packs. Below you’ll find a selection of products by Dick Strawbridge MBE. Click the images to view on Amazon's website. For bulk orders, please speak with your Booking Agent.

How to book Dick Strawbridge MBE for your event