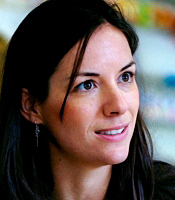 With a BSc (Hons) in Environmental Science and a Masters in Environmental Law, Jessica Sansom is the former Head of Sustainability at Innocent Drinks, the number one smoothie brand in the UK.

The Innocent story shows that with a non-corporate attitude, a fantastic product and creative thinking it is possible to create a fast growing, profitable company that acts responsibly and ethically. As a business, Innocent want to make it easy for people to do themselves some good - and they want to leave the planet a little bit better than they found it.

This is reflected in everything from the company's use of green electricity at Fruit Towers, to sourcing fruit from places that go the extra mile in terms of looking after the people that work on the farms, and the environment. All Innocent's bananas come from Rainforest Alliance accredited farms. Every year they donate 10% of our profits to the Innocent Foundation, which funds NGO's in the countries where they source their fruits.

Jessica Sansom was responsible for the company's commitment to becoming a model of sustainable capitalism - working not only to negate the business' major impact areas through ethical purchasing, resource efficiency and sustainable packaging but also to develop a future business model that will ensure the long term viability of the business whilst bringing value to meeting global sustainability challenges.

In addition to this role, she was also Company Secretary for the Innocent Foundation which funds sustainable agriculture projects in developing countries.

Prior to joining innocent, Jessica was Environment Manager for McDonald's UK, and also worked as an environmental consultant for a range of public and private sector clients in her home country of Australia. In 2008, she was named as one of Ethical Corporation's Ethical Leaders of 2008 alongside President Barack Obama and Bill Gates. She has also been featured in Rebecca Harrell Tickell's book “Hot Rich and Green”, a book highlighting 50 successful women in green business.

The Innocent Story...
Innocent was born when three university friends decided to set up a fresh fruit juice company. After six months of developing recipes in their kitchen, Richard, Adam and Jon were ready to test their drinks on a wider audience.

So they bought £500 of fruit, turned it into smoothies and sold them from a stall at a music festival. They erected a sign that read “Should we give up our day jobs to make these smoothies?”, and next to it placed one bin that said “No” and another that said “Yes”.

Fortunately, at the end of the weekend, the YES bin was full so the next day they all resigned from their jobs.

Innocent is now the number one smoothie brand in the UK with a market share of 73%. The company employs 270 people, and sells over two million little tasty drinks selling in over 11,000 outlets each week.

As the former Head of Sustainability at Innocent Drinks Jessica Sansom is in great demand as a keynote conference speaker, focusing on topics such as sustainability, the environment and corporate social responsibility.

Jessica’s key speech topics include:
• Futureproofing your business model – the global macro forces and trends that will impact today’s business models and how to adapt.
• What is sustainability leadership – what does it mean to be a leader in sustainability and who are today’s leaders?
• Sustainability, the forgotten component of business plans
• Partnering for success – the importance of cross-sectoral partnerships to achieve long term success.
• Reporting or engagement – is it more important to report or to engage if we want to face today’s environmental and health challenges?
• Sustainable nutrition – what will be the future licence to operate for the food industry?
• Small fish, big pond – how can an SME influence for sustainability?

How to book Jessica Sansom for your event