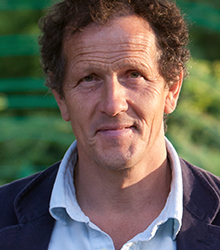 In recent times the name Monty Don has become synonymous with the presentation gardens on television. He became lead presenter of BBC Gardeners’ World in 2003, succeeding Alan Titchmarsh, however it is since 2011 when he returned to the show and began presenting from his own garden, Longmeadow, that he has created his unique niche as one of the nations most treasured television presenters.

Considered by many to be the doyen of horticulture, Monty Don was brought up in Hampshire where he gardened from a young age, and educated at a variety of schools and at Magdalene College, Cambridge.

From the early 1980's Monty and his wife Sarah set up and ran a jewellery business which enjoyed a great flurry of success in the mid eighties but folded in 1990 just as Monty's television and writing career was taking off.

Despite this being such a big blow, Monty remained positive about the failure and took a lot away from the experience saying “I learned much more from the failure of our business than I did from its success”.

Monty first appeared on television in 1989 on This Morning and continued as their regular gardening expert for eight years. Monty Don has now presented gardening and travel programmes for over twenty five years.

Monty Don's other TV credits include,Tomorrow's World,Fork to Fork,Real Gardens,Lost Gardens, Around The World In 80 Gardens, Growing Out Of Trouble, My Dream Farm and Mastercrafts. Monty presented a series on Italian Gardens on BBC2 which was followed by another on French Gardens. In 2014 Monty presented a series called Real Craft for More4 and Big Dreams Small Spaces for the BBC and his latest series for BBC2 The Secret History of the British Garden is due to be transmitted in 2015.

He also recorded a second series of Shared Planet for Radio 4. In this programme Monty explored the complex interface between a growing human population and wildlife.

Monty Don is a prolific journalist and was the Observer's gardening editor from 1994 until 2006 and now writes a regular column for the Daily Mail and Gardeners' World Magazine.

He has written over 20 books including the best selling Fork to Fork, The Sensuous Garden, The Jewel Garden (with Sarah Don), The Complete Gardener and more recently, The Road to Le Tholonet.

Monty is a committed organic gardener and was for many years the President of the Soil Association. He has worked with schools and groups of drug addictstobuild respect and reward from working with the natural world. Montyhas a strong belief in the importance of communities working together through an understanding and love of the land.

Monty Don has never had a set career plan but he does have a remarkable story.

In his insightful and entertaining after dinner speeches, Monty Don takes his audience on a personal journey — observed from the immediate world around him — revealing life at his home, Longmeadow, and what goes on behind the cameras when filming the nations best-loved gardening programmes.

Monty describes how he balances the position of his garden, as perhaps the most public garden in Britain, with being his own private garden. He talks about how the garden has influenced his own life, not only through how he presents it on BBC Gardeners' World, but as he nurtures it through the annual cycle of seasons from one year to the next.

He also shows us why our relationship with the natural world is vital to our wellbeing and culture - and explains the importance of nature to our lives. Human beings have relied on plants throughout our evolved history - to alter consciousness, to stimulate, to calm and to radically alter the way we see the world.

Whether you live in the countryside or the town, Monty's observations and insights are relevant to each and every one of us. “Gardens are the last bastion of many species as a result of the ravages of modern agriculture and the front line of climate change. 'Wildlife' or being 'In Nature' is not something that exists on the other side of the world but right here, right now outside your back door.”

We were thrilled to have Monty Don join our exclusive executive event as the special guest speaker. Whilst I am sure many of the business leaders there would have been happy to listen to Monty’s advice as to when to prune their roses, Monty offered so much more inspirational food for thought. Candidly sharing his life experiences, Monty hooked the audience with the lessons learned in the garden and how these are also great life lessons. ‘In life as in gardening, success comes from daring to fail.’ ‘Get the soil and roots right, all else will follow.

Monty Don was fantastic at the show and a very genuine person; a great choice for us. He did a great job and was professional throughout. Many people have commented via social media about his visit and he obviously had considerable impact on their perception of the event. Monty is a great character and lived up to all expectations.

Monty was a gentleman and a true professional. The talk he gave was outstanding and everybody enjoyed it. It was a pleasure to have him here and I will be asking him back after the showing of his next TV series.

Amazing! His talk was inspiring and I have had nothing but rave reviews.

Clients often ask about purchasing books for giveaways and delegate packs. Below you’ll find a selection of products by Monty Don. Click the images to view on Amazon's website. For bulk orders, please speak with your Booking Agent.

How to book Monty Don for your event