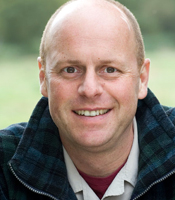 Joe Swift has been gardening since he left school and is a fully trained garden designer. He has been one of the main presenters on BBC2's flagship gardening show 'Gardeners World' since 1998 and also regularly appears in the BBC's coverage of RHS Chelsea, Hampton Court, Gardeners World Live and Tatton Park Flower shows.

Over the years Joe has fronted Open Gardens, Small Town Gardens, Garden Makers and Garden Invaders. He appeared on Celebrity MasterChef and many other programmes as a guest. Joe Swift has designed many gardens for TV, including one for Comic Relief, many for Gardeners World & all of the Alan Titchmarsh's 'How to be a Gardener 2' series. He is also a co-founder of Modular Garden - a garden design and build brand.

Joe Swift is the President of the National garden scheme, and Patron to many gardening charities including The Horniman Museum and The Harington Scheme. He plays bass guitar, is a life long Arsenal fan and plays football and golf whenever he gets the chance!

Clients often ask about purchasing books for giveaways and delegate packs. Below you’ll find a selection of products by Joe Swift. Click the images to view on Amazon's website. For bulk orders, please speak with your Booking Agent.

How to book Joe Swift for your event