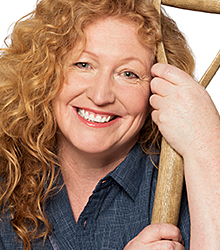 Charlie Dimmock is one of Britain’s best known and best loved gardeners, specialising in water features.

She first came into the media spotlight during the late 1990s through her appearances on BBC1’s incredibly successful Ground Force, where she quickly revealed several outstanding attributes, including her extensive knowledge of plants combined with a 'down to earth' sense of humour - an alluring mix that had viewers tuning-in in their millions. Literally in fact. At its peak, the programme had an audience of more than 12 million viewers, watching Charlie and builder Tommy Walsh giving a makeover to gardens of people nominated by their friends and family.

BBC America even made two series and as an outcome of this States-side exposure, Charlie also had a regular gardening strand The Early Show filmed in New York for CBS. Ground Force ran for 8 years and they made 12 series in that time.

Other UK gardening shows Charlie has presented include The Joy of Gardening (BBC2) and, in 2013, an episode of Great British Garden Revival (BBC2). In 2011, she joined ITV's Daybreak breakfast magazine show as the gardening expert. She has appeared on the Channel 4 reality show The Games, BBC’s Celebrity MasterChef and Ready Steady Cook. She has also presented for the BBC at the Chelsea Flower Show and the Hampton Court Flower Show.

Charlie Dimmock trained for 4 years as an amenity horticulturist in Winchester and Somerset (BTEC Diploma in Amenity Horticulture – distinction & National Technical Certificate in Turfculture and Sporting Management – distinction) and spent a year of her training at the Chelsea Physic Garden.

Her books include Enjoy Your Garden and Container Gardening. Charlie has also presented: Garden Rescue, The Allotment with Charlie Dimmock and Great British Garden Revival.

Charlie is a keen supporter of a number of charities, amongst them Hampshire Wildlife Trust & the Queen Charlotte’s Appeal.

Charlie Dimmock is available for after dinner talks, appearances and ribbon-cutting events plus gardening demonstrations - from large-scale events including the Ideal Home Show to intimate Q&A appearances at garden centre openings.

It was great, Charlie was wonderful and the sun shone. She couldn’t do enough for us and she was lovely to everyone. We all loved her so much it was sad to see her go. Thank you also for all your help, we have dealt with a lot of agencies over the years and you are definitely one of the best to work with.

Charlie was fabulous both with our invited guests and with the public as a whole. She was friendly, cheerful and very patient!

Clients often ask about purchasing books for giveaways and delegate packs. Below you’ll find a selection of products by Charlie Dimmock. Click the images to view on Amazon's website. For bulk orders, please speak with your Booking Agent.

How to book Charlie Dimmock for your event