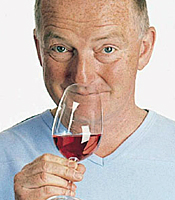 Oz Clarke is one of the world's leading wine experts, whose formidable reputation is based on his extensive wine knowledge and accessible, no-nonsense approach. His passion for the subject dates from his student days at Oxford University, where he won tasting competitions at a precociously early age.

Since then, his tasting skills have won him an international reputation and he is acknowledged as having one of the finest palates of anyone writing about wine today. Oz Clarke brings a refreshingly unorthodox wit and directness to the subject and has won all the major wine writing awards both in the UK and the USA. These include the Glenfiddich (three times), André Simon, Wine Guild (three times), James Beard, Julia Child, World Food Media and Lanson (five times) awards.

For this series and the accompanying book Oz and James were awarded the International Wine Challenge Personality of the Year Award, the TRIC (Television and Radio Industries Club) TV Arts/Documentary Programme of the Year Award and the Gourmand World Cookbook Award for Best Wine Literature. In 2010, Oz Clarke was created an Officier de l'Ordre du Mérite Agricole by the French government for services to French agriculture.

Before wine took over his life in 1984, Oz Clarke was a full-time actor and singer, appearing in West End hit shows such as ‘Evita', ‘Sweeney Todd' and ‘The Mitford Girls', and touring with the Royal Shakespeare Company.

Oz is also sports mad and supports Gillingham Football Club, near his childhood home in Kent.

Oz Clarke is the nearest thing to genius in the world if wine writing.

Clients often ask about purchasing books for giveaways and delegate packs. Below you’ll find a selection of products by Oz Clarke. Click the images to view on Amazon's website. For bulk orders, please speak with your Booking Agent.

How to book Oz Clarke for your event