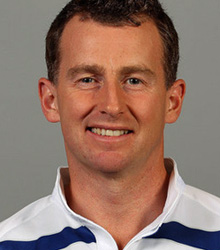 Nigel was appointed as an international referee in 2005, and that year officiated his first international between Ireland and Japan in Osaka. Owens made his World Cup debut in Lyon, France on 11 September 2007 in the Argentina vs. Georgia match.

He is one of only two referees to be appointed to referee two consecutive Heineken Cup finals. He has since done a third final, this as well as two Amlin finals makes a total of five European Finals making him the most capped referee in European competition.

In 2011 he was made a member of the Gorsedd of Bards. Nigel Owens was raised in the small village of Mynyddcerrig, Carmarthenshire, Wales. He is a fluent Welsh speaker. His autobiography, Hanner Amser (Half Time), was published in Welsh in 2008, then in English in 2009.

He was a patron of the LGBT Centre of Excellence Wales, until its disbandment in late 2012, but he is still that of the Wooden Spoon Society rugby charity. In 2013 Owens became a patron of Bullies Out charity in Wales.

Nigel Owens is an extremely popular and entertaining after-dinner speaker.

Please pass on our thanks to Nigel for a fantastic turn. His speech and Q&A were first class and everyone really appreciated the fact he signed autographs and was happy to have a few photos taken.

Please can you pass on our thanks to Nigel for an excellent session. The feedback from the conference has been very positive. His talk was described as:-“Very touching”“an excellent speaker”“an inspirational speaker”“brilliant talk”

Nigel was brilliant on the night and had the whole audience gripped, l really think everyone enjoyed his after-dinner talk and having him at the conference really enhanced the delegates experience.

Nigel’s talk was extremely well received by all. A story that many could resonate with told in a very engaging way.

Clients often ask about purchasing books for giveaways and delegate packs. Below you’ll find a selection of products by Nigel Owens MBE. Click the images to view on Amazon's website. For bulk orders, please speak with your Booking Agent.

How to book Nigel Owens MBE for your event