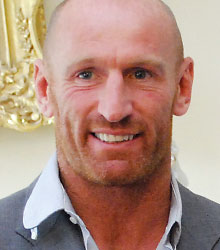 Originally from Bridgend in Wales, Gareth 'Alfie' Thomas has become one of the most iconic figures in world rugby. His career began in a small youth club in Bridgend, and has since rocketed into the sport's stratospheres, with his 1995 debut for Wales marking the beginning of an exceptional international career.

The versatile player has done it all in the game, with a staggering list of achievements to his name: he has over 100 caps for his home country; he is 13th highest try scorer in the world, and is one of just 7 players to have scored 4 tries in a match; he was captain of Wales' Grand Slam winning team in 2005, and also captained the British & Irish Lions tour of New Zealand that year. In 2005, he was named BBC Wales Sports Personality of the Year in recognition of his outstanding achievements.

In 2010, Gareth Thomas made the historic switch to rugby league when he signed with the Crusaders. His performances were nothing short of remarkable, earning 6 Welsh Rugby League caps. He retired from professional rugby in 2011.

Gareth Thomas' personal life hit the headlines in December 2009 when, at 35 years old, he famously revealed to the world that he was gay. This iconic revelation made him the first openly gay high profile sportsman in the UK. To come out in the macho world of rugby was, at the time, extraordinary. Since then, he has counselled other athletes on coming out, including a few footballers.

Although Gareth never downplays the significance of this achievement, he hopes to see a day when it is no longer an issue in the game at all.

He is a regular analyst for ITV Sport and has worked on the 2011 and 2015 and 2019 Rugby world cups as well as numerous RBS 6 Nations coverage.
In August 2010 he was voted top of the Pink List for the 101 Most Influential Gay People in the UK, and was voted Stonewall Hero of the Year 2010 too.

In 2019, Gareth further inspired the nation when he announced that he is living with HIV. His revelation was welcomed as an important step in breaking down stigma and helping the world better understand the subject.

Gareth Thomas has been regular on the keynote speaking circuit for many years and is hugely popular, addressing LGBTQ+ issues with the same vigour and enthusiasm with which he approached his playing career.

He is an experienced speaker on topics such as motivation, diversity, inclusion, the importance of teamwork and regularly delivers his unique story through a very moving and engaging talk to companies and organisations all over the UK.

Gareth uses his unique situation to captivate audiences with heartfelt talks about his impressive sporting career, as well as his personal life and the difficulties he experienced when trying to come to term with his sexuality.

The frankness and openness of his experiences — delivered through sincere and eloquent presentations — makes Gareth Thomas a rare and accomplished orator, as well as one of the most compelling sports personalities around.

I just wanted to say thank you so much for helping us bring Gareth Thomas to Fidelity last week. It was incredibly well received as an event and has really put our focus on diversity clearly on the map internally. I can't think of any way in which it could have gone better. Please do pass on our sincere thanks to Gareth.

Just wanted to send you and Gareth a note to say thank you so much for his amazing speech on Thursday. We really were all touched by his truthful and open story – never before have we had a standing ovation like that at our dinner!

Clients often ask about purchasing books for giveaways and delegate packs. Below you’ll find a selection of products by Gareth Thomas CBE. Click the images to view on Amazon's website. For bulk orders, please speak with your Booking Agent.

How to book Gareth Thomas CBE for your event