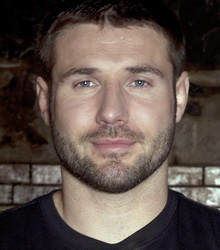 Before taking on the challenge of Strictly Come Dancing and winning The Jump, Ben Cohen was a big, quick and prolific try scoring winger in Rugby Union.

Ben — who is medically classed as deaf — came to prominence in the successful Northampton side that lifted the Heineken Cup in 2000. His impressive skill set and raw ability quickly brought him to the attention of England boss Sir Clive Woodward, who handed him an international debut against Ireland during the 2000 Six Nations.

Ben became a regular fixture of the England side under Woodward and became a high try-scorer on the international stage. He is behind only Rory Underwood on the scoring charts and toured with the British & Irish Lions to Australia in 2001.

He started six games at the Rugby World Cup in 2003, receiving a winners medal and MBE after winning the tournament against hosts Australia.

In 2009, Ben joined Sale Sharks, and two solid seasons with Sale, during which he played 37 games and scored eight tries, he was surprisingly released from at the end of the 2011 season having just picked up the club's Player of the Season award. At the age of 32 having scored 31 tries in 57 international matches for England Ben retired from the game.

Ben went on to set up the Stand up Foundation which raises awareness of the long-term, damaging effects of bullying.

Ben Cohen's interest in the subject was partly inspired by his father, who lost his life standing up for an employee who was being attacked. Ben's father, Peter Cohen, was the brother of the 1966 football World Cup winning fullback George Cohen.

The Ben Cohen StandUp Foundation is the world’s first foundation dedicated to raising awareness of the long-term, damaging effects of bullying, and funding those doing real-world work to stop it.

The Foundation stands up against bullying regardless of to whom it happens. Because lesbian, gay, bisexual and transgender (LGBT) people are often targeted by bullies, the organisation gives particular attention to this community. They include removing homophobia from sports as central to their mission.

Ben Cohen was easy to work with. Well prepared and happy to be flexible with the brief. Delivered what we wished for and more.

Ben Cohen was great. Engaging on stage with a nice mix of stories and insight. An interesting guy and very good company.

Clients often ask about purchasing books for giveaways and delegate packs. Below you’ll find a selection of products by Ben Cohen MBE. Click the images to view on Amazon's website. For bulk orders, please speak with your Booking Agent.

How to book Ben Cohen MBE for your event