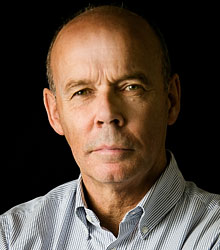 Sir Clive Woodward enjoyed a highly successful business career whilst playing International rugby as an amateur. After retiring as a player he began his remarkable coaching career. After success at club level and England U21's Clive became the first ever full time professional Head Coach for England.

The resulting transformation of the national side led to England at last beginning to beat southern hemisphere teams on a regular basis, becoming ranked No 1 in the world, and ultimately winning the greatest prize in rugby, the World Cup, in November 2003. On his return from the World Cup victory Clive Woodward was rewarded with a knighthood.

In 2005, Sir Clive entered the world of football, joining Southampton FC as Technical Director. Less than six months in to his new role he was promoted to the position of Director of Football, working alongside Head Coach George Burley.

In 2006 he joined the British Olympic Association and, as Director of Sport for Team GB worked in close partnership with all key stake holders in British sport to support of our national coaches, athletes and players to deliver the most successful Olympic Games for Team GB in the modern era. The team won 65 medals including 29 Gold medals, finishing in third position in the overall Olympic medal table.

Sir Clive Woodward has secured his place in history. His reputation as a world-class leader makes him one of the most sought after public speakers industry-wide. As the architect of England's greatest sporting achievement since the 1966 World Cup victory, Clive's visionary approach to 'winning' has captured the imagination of the sporting world.

But it's not only in the field of elite sport that Clive's principles have proven to have particular resonance. The philosophies inherent in the development of high performance teams are the result of a cross-pollination of ideas from Clive's experience of business and sport.

The qualities that identify a leader are common to both business and sporting environments. The ability to think correctly under pressure is as key to success in the boardroom as it is in the cauldron of a sell-out international fixture.

Sir Clive Woodward's success lies in his ability to communicate and instil often challenging ideas with a practical and proven methodology. Worldwide brands and corporate businesses have identified how Clive's philosophies can benefit their strategic development. Nike, British Airways, O2 and Zurich, to name but a few, have all seen the effect of his presentation in the day-to-day work environment.

Equally, his seminars can be tailored to audiences of any size and make-up.

The DNA of a Champion
“How do you want to be remembered?”
Based on the notion that “Great Teams Are Made of Great Individuals” Sir Clive Woodward has identified four criteria which he believes characterise a champion individual or team in both business and sport. ‘The DNA of a Champion’ details each of these criteria, but also how they can be coached to achieve high performing teams.

Winning Culture
“Organise, evolve, share”
A successful coach and leader is one who can effectively capture and share their knowledge. Sir Clive Woodward believes it is important to formalise this process and is currently working with the IOC and a number of young talented athletes to this end. The goal of this process is to highlight the Winning Moves – those practices crucial to success.

Relentless Learning
“Never lose, either win or learn”
Having worked with champion teams and individuals in sport and business over the last 2 decades Clive has identified that the ability to learn and take on new skills is a key characteristic of any Champion individual. In this talk on “Relentless Learning” Clive will explain the importance of learning and collaboration in high performance and describe how he coaches teams and individuals to learn better together everyday.

Tackling Change
“100 things 1% better”
Sir Clive Woodward’s reputation as an innovative leader is driven by his determined approach to challenge the traditional school of thought and find new, different ways of operating. In his talk on ‘Tackling Change’ Clive highlights where his inspiration for change originated and illustrates how effective change creates an inspiring and engaging culture off the field as well as impacting performance on the field.

The Power of Data And Technology
“Whoever wins in it tends to win”
Data and Technology is a very powerful tool in sport and business. But only if everyone understands Why and How to use it. In this talk I explain how I use Data and Technology with the teams that I work with and the impact it can have on individual and team performance.

We very much enjoyed having Clive speaking at our Conference. His speech was one of the cornerstones of the event and extremely well received. The speech was very motivational and inspiring and it fit perfectly into the overall theme of the conference. In short, we couldn't have had a better speaker for the day.

Everything went brilliantly on Friday and everyone thought Sir Clive's inclusion was brilliant. Great content that fitted perfectly with our messaging on the day.

The overall 2 day conference was a huge success and we have had outstanding feedback on Clive's Session. It was 100% spot on in terms of tone, appropriateness for the audience, examples and actionable next steps for everyone to take out. I have had fantastic feedback from the leadership team and anecdotal feedback from delegates has been great as well.

Clients often ask about purchasing books for giveaways and delegate packs. Below you’ll find a selection of products by Sir Clive Woodward OBE. Click the images to view on Amazon's website. For bulk orders, please speak with your Booking Agent.

How to book Sir Clive Woodward OBE for your event