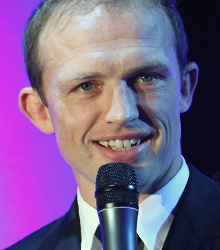 Part of the England squad that took the country to victory in the 2003 World Cup, Matt Dawson is an institution in the world of rugby. He is immediately recognisable as team captain on BBC2's 'A Question of Sport' as well as a rugby commentator for the BBC and Radio 5Live.

With 77 caps under his belt, he is England's most capped scrum half, captaining the side 9 times. He played for Northampton and the London Wasps as well as England, and represented the British & Irish Lions on three tours. During the 1998 tour to Australia and New Zealand - 'The Tour from Hell' - Matt was congratulated on his leadership. He also captained the England Rugby team to win the Six Nations Championships in 2000.

Regarded as one of the more outspoken players, Matt Dawson is a favourite with the BBC's rugby coverage and has had substantial experience in written journalism. His position on 'A Question of Sport' has elevated him from a well-known rugby player to a national TV personality.

In 2006 he took part in the BBC's 'Celebrity Masterchef' and won. Matt then put on his dancing shoes to become the runner up in the BBC's primetime programme 'Strictly Come Dancing', which attracted over 12 million viewers per show.

Clients often ask about purchasing books for giveaways and delegate packs. Below you’ll find a selection of products by Matt Dawson MBE. Click the images to view on Amazon's website. For bulk orders, please speak with your Booking Agent.

How to book Matt Dawson MBE for your event