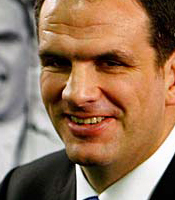 Martin Johnson's international career began when he played for the England Under 18's in 1987. He joined Tigers' senior squad in 1989 and in the summer of that year, represented King Country in New Zealand. He was subsequently selected for the NZ U21 to tour Australia the following year.

Martin made his England debut as an 'eleventh hour" replacement for Wade Dooley in 1993 and went on later that year to play numerous England A internationals and toured NZ with the British Lions, again replacing Dooley.

Martin Johnson was named the '98/'99 Allied Dunbar Premiership Player of the Season and after being appointed Tigers' club captain in '97 led the Leicester team to a Pilkington Cup victory, four successive Premiership titles 1999-2002 as well as the inaugural Zurich Championship in 2001. There was also the small matter of back to back European Heineken Cup triumphs in 2001 and 2002.

Even before he held the William Webb Ellis Cup aloft in Sydney on 22 November 2003, Martin held a unique position in world rugby being the only man ever to have captained the British Lions on two separate tours, to South Africa in 1997 and Australia 2001.

The World Cup triumph over Australia in Sydney meant that he became the first player from a Northern Hemisphere side, to captain his team to a World Cup triumph. Earlier in the year Martin had also led the England team to their Grand Slam victory in the 2002/3 Six Nations Championship, their first Grand Slam since 1995, and their first in the expanded competition.

As Leicester's longest ever serving captain, he became the 33rd player to have made 300 appearances for the club following his appearance against Bristol in 2003. To cap an outstanding career Martin was awarded a CBE in the 2004 New Year's Honours list.

Clients often ask about purchasing books for giveaways and delegate packs. Below you’ll find a selection of products by Martin Johnson CBE. Click the images to view on Amazon's website. For bulk orders, please speak with your Booking Agent.

How to book Martin Johnson CBE for your event