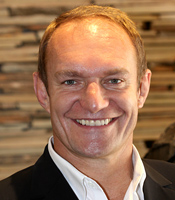 Francois Pienaar captained the South Africa rugby team from his first match and in every one of his 29 appearances, culminating in the famous victory at the World Cup in 1995.

He was acknowledged at that time as an inspiring leader, with an uncompromising approach to commitment. He has won many accolades, which include:

In 1996, he joined the Saracens Club in England and later became the first player / coach in game and later the CEO at Saracens. He helped to transform Saracens from an amateur to a very professional rugby club. Under Francois leadership they won their first ever trophy in 127 years. He received an honorary doctorate at the University of Hertfordshire at the age of 33.

Francois Pienaar was chosen to be the ambassador for Guinness and Visa, the main sponsors during the 1999 and 2004 Rugby World Cups. He was also part of the ITV Rugby World Cup commentary team and was twice nominated by the Royal Television Society for an award as best sports pundit. He has been the only amateur to receive such a nomination.

Six years later Francois and his family, his wife Nerine and boys Jean and Stephane, returned home to South Africa.

In March 2009 Francois Pienaar was approached by the Indian Premier League to spearhead their marketing campaign in South Africa. He left First Rand Bank to follow his passion for sport, media and entertainment and started Advent Sport Entertainment and Media Pty Ltd in 2009 in which First rand Bank became a shareholder.

In 2009, Warner Brothers under the direction of Clint Eastwood produced the Oscar nominated movie “Invictus” focusing on the 1995 Rugby World cup in South Africa and how a once divided nation became world champions. Mandela's role is played by Morgan Freeman and Francois Pienaar is played by Matt Damon.

• The Courage to Lead
• Invictus: The Unconquerable Spirit that Makes Dreams Reality
• Uniting a People and a Country: Nelson Mandela & François Pienaar

Francois Pienaar was a sensational hit for KPMG in Rome. He got rave reviews and the client was ecstatic! Please extend our thanks and appreciation to Francois for an outstanding presentation.

Francois did a wonderful job. He delivered the perfect message.

Francois Pienaar exceeded our expectations. Everyone said he was the highlight of the evening.

Clients often ask about purchasing books for giveaways and delegate packs. Below you’ll find a selection of products by Francois Pienaar. Click the images to view on Amazon's website. For bulk orders, please speak with your Booking Agent.

How to book Francois Pienaar for your event