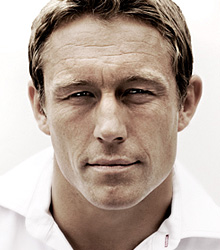 World-Cup-winning Jonny Wilkinson was, is, and probably always will be considered one of the greatest English rugby players of all time. His career has crossed three decades and four World Cups, he has accumulated phenomenal achievements, world points records, an impressive list of broken body parts, and a drop goal that will be remembered forever.

Jonny became England`s youngest international for 71 years when he made his debut at 18 years old in March 1998. He has since won 91 caps for his country and is the second most prolific points scorer in Test rugby. In the 2003 World Cup he scored the drop goal that won the tournament.

He endured a succession of injuries that kept him out of international action for over three years but he returned to help England make it to the final of the 2007 World Cup. He has also won six caps for the British and Irish Lions.

Jonny Wilkinson was the 2003 BBC Sports Personality of the Year. Then, in April 2009 at Guildford Cathedral, he was awarded an honorary doctorate by the University of Surrey for services to the sports industry. And in November 2016, he was inducted into the World Rugby Hall of Fame at the opening ceremony for the Hall's first physical location in Rugby, Warwickshire.

He was awarded the MBE in 2003, the OBE a year later and in the 2015 New Year Honours List he was awarded the CBE. Jonny played club rugby for Newcastle from 1997 until 2009. He joined the French club Toulon in 2009 until 2014, after which he retired from playing all rugby.

Since his retirement, Jonny Wilkinson has appeared as a studio pundit for Sky Sports and ITV Sport, working on coverage of the Champions Cup, Six Nations Championship, Rugby World Cup and England Internationals.

In his motivational keynote presentations, Jonny Wilkinson reveals the extraordinary psychology that he had to tame in order to be able to dominate his sport.

For most of his life, Jonny was driven by a quest for perfection and an obsession to be the best player in the world. He explains how these two facets of his competitive mind took such a hold of him that they sent him to the top of the world, then swept him up and dragged him down into a spiral of despair.

Jonny’s career has spanned the far reaches: amazing highs and iconic moments, then a fight against injury that culminated in a battle with depression. He tells of the physical toll he knew his body was taking from rugby, even from his youth; and of how he never wanted to be a kicking fly-half but learned to adapt his natural game to play the style that Sir Clive Woodward believed necessary to win a World Cup, and how he nearly walked out on Martin Johnson's England team 13 years later.

We have had some amazing feedback, with a couple of people even saying Jonny was the best speaker so far! Great take home messages, and amazing honesty from him.

Clients often ask about purchasing books for giveaways and delegate packs. Below you’ll find a selection of products by Jonny Wilkinson CBE. Click the images to view on Amazon's website. For bulk orders, please speak with your Booking Agent.

How to book Jonny Wilkinson CBE for your event