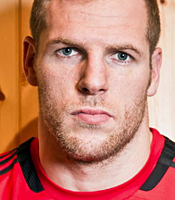 In 2006 James was selected to play for the England Sevens team in the IRB World Sevens Series in Dubai. A year later, and still only 21, James was selected for the senior England side and gained his first England start in the Six Nations against Wales at the Millennium Stadium. His versatility and ability to play in every position across the back row soon resulted in James becoming a key player in the England set up. James was a member of the 2011 World Cup squad in New Zealand and has gone on to be capped by his country 43 times so far – making him the second highest capped player.

James Haskell spent seven years at Wasps before he moved to France for two years to play for Stade Francais in 2009. After the 2011 World Cup in New Zealand James spent time playing for Japanese side the Ricoh Black Rams, before gaining a contract for the rest of the season with Super 15s side Otago Highlanders. In the summer of 2012 James moved back to England and signed a 3 year contract to re-join Wasps.

At 6'4”, James Haskell is a massive fan of MMA fighting and is a very keen shooter.

James Haskell is widely acknowledged as being one of Rugby’s more interesting, vocal and larger-than-life characters.

An experienced and sought-after motivational speaker, delivering entertaining, inspiring and motivating speeches, James has a wealth of stories and recollections of his time spent playing abroad and discovering the different cultures both on and off the pitch. He has hosted numerous corporate occasions, such as award ceremonies, dinners, Q&A panels, and enjoys delivering speeches at high profile events.

So whether you are looking for a motivational team talk, a fascinating insight into World Rugby from someone who has played in virtually every major league or a light hearted and very amusing recollection of his experiences with some of the truly great characters of the game, then James Haskell is your man.

Clients often ask about purchasing books for giveaways and delegate packs. Below you’ll find a selection of products by James Haskell. Click the images to view on Amazon's website. For bulk orders, please speak with your Booking Agent.

How to book James Haskell for your event