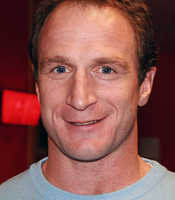 A utility back, he has played for England at full back, fly-half, inside centre and even wing, and was part of the England side that won the 2003 Rugby World Cup.

After trialing for Gloucester R.F.C., the young fly-half made his Bath debut as a 21-year-old against Nottingham R.F.C. in 1992. Eighteen months later was given his international debut against Wales. His breakthrough performance however came in England's following match against Canada at Twickenham Stadium, where he came on as an injury-replacement for the incumbent England full back Paul Hull. England's emphatic victory, Hull's untimely injury, and Catt's impact in the late stages of the game cemented Catt as the new darling of English rugby that season.

Catt was called up as an injury replacement in the 1997 British Lions tour to South Africa and played in the final test. At the time the England squad, or at least what remained of it given that a substantial portion of the first XV were wearing the red shirt of the Lions, were touring Argentina, where Catt was showing excellent form.

In 2000, with the retirement of centres after the 1999 World Cup, his career was revived when he stepped in to midfield. Acting as an inside centre, with Jonny Wilkinson his kicking and distribution was responsible for the high try counts of that year.

Mike Catt was part of the squad that won the 2003 World Cup, playing instead of Mike Tindall at centre in the semi-final against France because of his superior kicking skills and an injury to Tindall. He kicked the ball in to touch for the final whistle seeing England become champions.

At the end of the 2003-4 season, Bath decided not to renew his contract with the club and he moved to London Irish, where he has enjoyed a fruitful twilight of his career, resulting in May 2006 in one of five nominations for the Guinness Premiership Player of the Season award. Subsequent to his nomination as Player of the Season he has found himself adopted as an unlikely sex symbol by female rugby fans. He has received an England recall, making his first Test appearances for two years on the summer tour to Australia, cementing his place in England's top ten most capped players.

Clients often ask about purchasing books for giveaways and delegate packs. Below you’ll find a selection of products by Mike Catt OBE. Click the images to view on Amazon's website. For bulk orders, please speak with your Booking Agent.

How to book Mike Catt OBE for your event