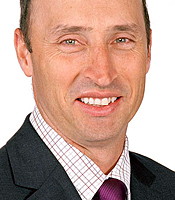 Born in the southern Indian city of Chennai, Nasser Hussain had his first encounter with cricket when his father, Jawad Hussain, a first class player for Tamil Nadu, took him to Chepauk for practice. Jawad relocated his family to England in 1975, where Nasser followed his passion and become the youngest player to represent Essex U-15 at the age of 12.

He rose through the Essex ranks quickly with his batting and leg-spinning abilities, but lost the spinning abilities as he grew taller, so concentrated on his batting. Nasser was an important part of the Essex team that won the 1991 County Championship. He was selected for England initially on the back of a mammoth 990 runs which he had scored for Essex in the County Championship of 1989.

After making his Test debut as a 21 year old, Nasser Hussain quickly matured as a County and International player, achieving success as a batsman of superior technique and the patience to build a big innings score. Over the years he improved tremendously with a wide range of strokes, excelling in the drive and cut, but with sound defence and was a superb fielder in any position.

In 1996, Nasser was appointed as Vice Captain to Michael Atherton and then to Alec Stewart in May 1998. In June 1999 he was named England captain after 39 Tests. This was also the year he was made Essex captain and was called into the World Cup squad. More than his batting skills, it was his leadership abilities that had a major impact on England cricket over the years.

As England Captain, from 1999-2003, Nasser Hussain won four consecutive Test series, a feat only matched by WG Grace and Mike Brearley and England climbed from last to 3rd in the ICC Test Championship ranking table. Hussain’s style of captaincy was a reflection of his personality, never static, always full of energy and ideas.

He was known to make four field-changes in one over in a Test match, searching for the solution, trying to make up for the lack of variety among his attack of mostly right-arm seamers with his own imaginative placements. His batting while captain veered from one extreme to another, from the heights of England’s tour to South Africa to a worse run than even Brearley knew.

After a disappointing 2003 ICC World Cup in South Africa, he relinquished the ODI captaincy and then resigned as Test captain, after 45 Test matches, during the Test series against South Africa in the summer of 2003.

In the summer of 2004, Nasser Hussain retired from cricket having scored 103 not out against New Zealand in the summer's first Test - scoring the winning run at Lord's with his favourite shot, a cover drive. Nasser retired as eighth on the list of England's most capped players.

Since his retirement, Nasser has joined Sky Sports for whom he works at home and abroad, giving his expert views during England Tests, One-Days and domestic cricket matches. Nasser is accomplished in all areas of media work and in addition to his Sky Sports work he currently contributes a weekly column to the Daily Mail.

In 2005, Nasser Hussain released his autobiography, Playing With Fire, which won the Best Autobiography category of the 2005 British Sports Book Awards. Nasser played himself in the 2011 Bollywood movie Patiala House, in which Akshay Kumar played the leading role.

Clients often ask about purchasing books for giveaways and delegate packs. Below you’ll find a selection of products by Nasser Hussain OBE. Click the images to view on Amazon's website. For bulk orders, please speak with your Booking Agent.

How to book Nasser Hussain OBE for your event