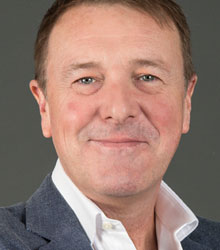 One of the most popular and charismatic characters in English cricket, former England international cricketer turned television personality and winner of ITV's 'I'm a Celebrity Get Me Out of Here', Phil Tufnell is affectionately known throughout the cricketing world as 'The Cat' and ‘Tuffers'.

Born in north London, Phil played cricket for Middlesex and England between 1986 and 2002. A slow left-arm orthodox spin bowler, he was tipped as the most talented English spinner of his generation and took 121 wickets during his 42 test match career, including an incredible 11 wickets in a single test against Australia. He is listed as 35th for the most wickets taken by an England bowler.

Phil took over 1,000 wickets across all first-class cricket at an average of 29.35, and his cheerful personality and trademark cheeky-boy behaviour rapidly made him a popular sports personality.

Since retiring from professional sports prior to the 2003 cricket season, he became a hugely popular summariser on Test Match Special, was a team captain on the BBC’s A Question of Sport between 2008 and 2021, and won ITV’s I'm a Celebrity... Get Me out of Here! when over 13 million people watched him crowned King of The Jungle.

Phil Tufnell has hosted a wide range of TV and Radio shows since his retirement, including working on BBC Radio’s ‘Test Match Special’, a regular spot reporting on ‘The One Show’ and participating in ‘Strictly Come Dancing’ during 2009.

He is regularly in the media and has previously been an ambassador for several leading brands including Aviva, Boots, Party Casino, Betfair, Marmite, Npower and Lilly.

His autobiography "What Now?" was published in 1999, and in 2003, he co-authored a humorous book, “Phil Tufnell’s A To Z of Cricket” with cricket journalist Adam Hathaway.

Phil Tufnell has been entertaining audiences, and in particular sporting functions, for more than two decades. He combines his cricketing knowledge and expertise with his 'mischievous' and 'laddish' reputation, regularly enjoying banter and chit-chat that refers to his alleged misdemeanours. Over the years, Phil has become highly sought-after for his combination of speaking and question & answer sessions, to which Phil's personality is extremely well suited.

Whilst not an after dinner speaker per se, Phil Tufnell excels when being interviewed on stage and taking questions from the audience. He is always happy to give his honest, passionate, amusing and, if need be, controversial opinion on a number of topics, sport related or not.

Through his openness, Phil endears himself to the audience, allowing them to relate to his past experiences, which always ensures a relaxing and very enjoyable evening. He is more than happy to make an appearance as a 'celebrity face' to make an evening a little extra special for both young and old.

He is extremely accommodating to bookers who wish to discuss matters with a sporting celebrity.

He was lovely! Arrived in good time and signed all the books and just went with the flow. Had everyone engaged and laughing!

Clients often ask about purchasing books for giveaways and delegate packs. Below you’ll find a selection of products by Phil Tufnell. Click the images to view on Amazon's website. For bulk orders, please speak with your Booking Agent.

How to book Phil Tufnell for your event