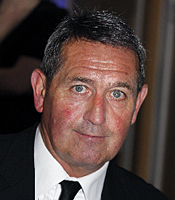 Born in the East End of London, Graham Gooch rose through the ranks at Essex, before debuting for England in the 1975 Ashes.

After reminding the selectors with fine county displays, Gooch was recalled, and was by 1982, an established member of the England team. He agreed to lead a rebel tour of apartheid South Africa and was subsequently banned from international competition.

Returning in 1985, Gooch made decent scores, but it was not until later in his career that he excelled and started to reap the rewards of his efforts. Appointed England captain in 1990, Gooch found an extra gear, and enjoyed a new lease of life. Fine first-class form continued and his captaincy led England to the World Cup final.

Despite outstanding county form in early 1995 and 1996, following an earlier slump, an international recall was not to be, and Gooch settled for a selector's job shortly before retiring.

Goochy was superb – very funny, spoke for ages (but definitely not too long) and entertained a mixed-sport audience very well.Gatting [Mike Gatting] and Boycs [Geoffrey Boycott] certainly came in for some very amusing stick!

How to book Graham Gooch for your event