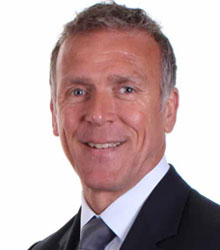 Affectionately known as the 'gaffer' of English cricket, Alec Stewart is the most capped England cricketer of all time with 118 international appearances. When he was in full flow, there were few who could match him. Relying on touch, he was in his element against the quicks, cover-driving with a neat flourish and pulling with panache - most memorably when he thundered two centuries during England's storming of 'fortress' Bridgetown in 1993-94.

He took over the England captaincy from Mike Atherton in 1998 and promptly led the side to its first major series win for 12 years, against South Africa. He hit top form again during the 2000 one-day triangular series, and when he scorched a century in his 100th Test, the sheer length of the standing ovation he received suggested that Stewart had become a national institution.

Against India at Lord's in 2002, he crowned his achievements by becoming England's most-capped Test cricketer, overtaking Graham Gooch's record of 118 matches. Fittingly, his final game - against South Africa in the summer of 2003 - was hosted at The Oval, his home ground, in which he scored 38, but more importantly to a man like Alec Stewart, England won.

Alec works as a regular cricket analyst on Radio 5 live and across Sky Sports and the BBC's cricket coverage. He also remains close to Surrey cricket club as an ambassador and is a principle ambassador for Vodafone and their sponsorship with the English cricket team. He has also appeared on Sky One's The Match and is widely recognised as a very talented footballer who could have had a career in the game. As a keen Chelsea fan he follows them across Europe.

With his vast experience & respect within the sporting world, Alec Stewart has a lot to offer on leadership & motivational skills. His business focused motivational speech 'Leave Nothing to Chance' mirrors his approach of preparation and dedication.

Combined with his natural comic timing, Alec Stewart is a gifted speaker with a confident and considered delivery which ensures an entertaining, enlightening and thought provoking speech, which can also be tailored to after dinner engagements as much as motivational business presentations for conferences and other corporate events.

Thanks for all your help. Alec Stewart was wonderfully entertaining!! Our audience loved him. He really is easy going and very pleasant. It was a great choice! Thanks for your help!!!

Many thanks for your excellent after dinner speech at the CECA Vision North West 2014. It prompted plenty of lively discussion, and was a real tonic during these tricky economic times.

Clients often ask about purchasing books for giveaways and delegate packs. Below you’ll find a selection of products by Alec Stewart OBE. Click the images to view on Amazon's website. For bulk orders, please speak with your Booking Agent.

How to book Alec Stewart OBE for your event