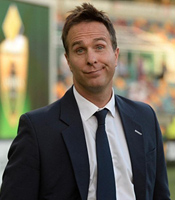 Michael Vaughan's playing career may have ended in frustration when knee problems forced his retirement, but his place in modern cricket history had already been assured after his major role in reclaiming the Ashes amid emotional scenes in 2005.

He had already established himself as a technically fluent and composed batsman of the highest standard when he took over the England Test captaincy from Nasser Hussain in 2003.

But for all his outstanding strokeplay – and when Vaughan was on song there were few better batsmen in world cricket – he will be remembered most for capturing the hearts of the nation in leading England to their outstanding 2005 Ashes triumph.

The first signs that Vaughan was going to be a special player came in 2002, when he scored 900 runs in seven Tests against Sri Lanka and India and laid the foundation for an outstanding Ashes tour and his rise to No 1 in the world Test rankings.

He became the first visiting batsman in 32 years to score more than 600 runs in that series down under, prompting Shane Warne to claim Vaughan was one of the best batsmen he had ever bowled at, and when Hussain stepped down as one-day captain he was the obvious candidate to replace him.

Vaughan was such a success leading the one-day side, Hussain no longer felt the side was his when they reported for the Test series against South Africa in the summer of 2003 and resigned after the opening Test at Edgbaston. Once again the selectors turned to Vaughan as his replacement – a decision which ushered in one of England's most successful periods in the modern era.

Michael forged a team that became the first England team in over three decades to win a series in the Caribbean. They won all seven Tests in the summer of 2004 and won in South Africa before the ultimate – winning the Ashes for the first time since 1986-7.

Just as Vaughan and England set their sights on establishing themselves as the No 1 Test side in the world, injuries disrupted their progress with Vaughan arguably the biggest casualty to their hopes of building on the Ashes triumph. A succession of knee injuries restricted him to only 18 more Tests in the four years which followed 2005 and ultimately prompted his retirement in 2009.

He did recover from his injuries long enough to return and lead England to the 2007 World Cup in West Indies, but a succession of low scores the following summer prompted Vaughan to resign in an emotionally-charged press conference after South Africa won the Test series with victory at Edgbaston.

His intention was to take a break from the game, recharge his batteries and form with Yorkshire during the 2009 season and fight his way back into England contention. More knee troubles forced Vaughan to retire from all cricket mid-way through that season in time for him to watch Andrew Strauss emulate his achievement as England captain by regaining the Ashes.

Vaughan's appetite for the game has not diminished in retirement and he helps out at Yorkshire, he is a mentor for England under-19s and has forged a successful broadcasting career with BBC's Test Match Special.

I enjoyed meeting him at the dinner last Thurs. evening and his fantastic contribution to everyone's enjoyment of the evening. His Q. and A. session with David Callaghan was extremely interesting and very well received and certainly made for one of the most enjoyable dinners the Club has hosted.

Clients often ask about purchasing books for giveaways and delegate packs. Below you’ll find a selection of products by Michael Vaughan. Click the images to view on Amazon's website. For bulk orders, please speak with your Booking Agent.

How to book Michael Vaughan for your event