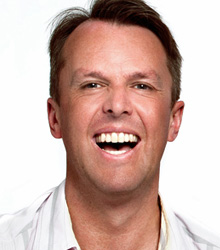 Graeme ‘Swanny’ Swann, although primarily an off-spinner, was also a capable late-order batsman with four first-class centuries, and often fielded at slip. After initially playing for his home county, Northamptonshire, for whom he made his debut in 1997, he moved to Nottinghamshire in 2005.

He made his debut for England in 2000 but it wasn’t until 2007 that he became an essential part of the team in all formats. In 2011 he was a member of the England Team that claimed the number one world Test ranking spot. Graeme Swann was involved in four Ashes tours, winning at home in 2009 and 2011 and in Australia in 2010-11.

He retired because of injury from all formats during the 2013-14 series. Since retiring Swanny has become a steadfast member of the award winning Test Match Special (TMS) and completed sell out theatre tours of the UK with his show The Great British Spin Off featuring Henry Blofeld.

In 2018 Graeme took on the challenge of the 16th series of Strictly Come Dancing, even though he is not, by his own admission, a natural dancer. Paired with Oti Mabuse, Graeme survived the dance off to make it to Blackpool.

If Graeme isn’t talking about cricket or dancing he’ll be following his beloved Newcastle United or singing in his band, Dr Comfort and the Lurid Revelations.

Clients often ask about purchasing books for giveaways and delegate packs. Below you’ll find a selection of products by Graeme Swann. Click the images to view on Amazon's website. For bulk orders, please speak with your Booking Agent.

How to book Graeme Swann for your event