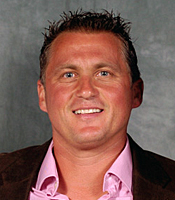 He was first selected for the England cricket team in 1994, playing both Test and one-day international cricket. He made an impact as a bowler and as a tail-end batsman.

In 2005 Darren took part in the flagship BBC television show Strictly Come Dancing, which he won with his dancing partner Lilia Kopylova.

Darren Gough is a popular awards host, and with his media profile is in regular demand for personal appearances and ribbon-cutting ceremonies. As a speaker he is keen to accept Q&A style interviews and offers a motivational /speech about his career.

Clients often ask about purchasing books for giveaways and delegate packs. Below you’ll find a selection of products by Darren Gough MBE. Click the images to view on Amazon's website. For bulk orders, please speak with your Booking Agent.

How to book Darren Gough MBE for your event