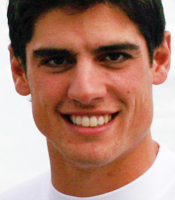 Listen to those in the know, and Sir Alastair Cook is talked about as destined for great things in the game. Having tasted life with the full England squad as cover for Michael Vaughan in Pakistan, a bright future really does look likely.

He captained England in the 2004 Under-19 World Cup in Bangladesh and scored two centuries while leading them to the semi-finals. He scored his maiden first-class hundred, against Leicestershire at Chelmsford in 2004, and having already impressed the likes of Andy Flower and Darren Gough, his county team-mates, a blossoming future beckons.

A fine season in 2005 including an outstanding double century against the touring Australians was rewarded when he was voted Cricketer of the Year by the Cricket Writers' Club.

In 2019 Alastair was awarded a Knighthood for services to cricket.

Sir Alastair’s style is based on ‘An Interview with Sir Alastair Cook’ to ensure the theme and message is delivered by Alastair through the use of a host to ask the pre-arranged questions.

Alastair’s insight into leadership (as England’s most capped and record holder for most games as captain) and the importance of teamwork and performing at the highest level is truly unrivalled and allows for an incredibly insightful revelation about what it was like to be part of several teams and captain in both successful and less successful times.

Now retired from playing for England he really can give an inside track on what 12 years of constant pressure and the need to deliver was really like.

Clients often ask about purchasing books for giveaways and delegate packs. Below you’ll find a selection of products by Sir Alastair Cook. Click the images to view on Amazon's website. For bulk orders, please speak with your Booking Agent.

How to book Sir Alastair Cook for your event