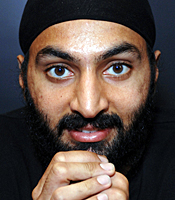 Mudhsuden Singh Panesar, known in the game as 'Monty', quickly established himself as a national hero following a series-winning display against Pakistan in 2006.

With his black patka, softly spoken Bedfordshire burr and eager (if sometimes comical) fielding, he has rapidly become the fan's favourite. And with his plate-sized hands, England's most prized spinner in over a decade.

He took the well-trodden path from Bedfordshire, where he was born, to Northamptonshire, progressing through the youth teams until he was chosen to play for England Under-19s, which he did for two seasons. He then made his first-class debut, marking the game against Leicestershire with a return of eight for 131 in the match and four for 11 in the second innings. However, first-team opportunities were limited and after a mere two appearances in 2001 he played only six first-class matches in 2002. Even so, he took 17 wickets at just over 32 each and did enough to earn himself a place in the National Academy squad in Australia during the winter.

A fine season in 2005, when he took 46 Championship wickets at 21.54, was followed by a stint at the Darren Lehmann Academy in Adelaide, and led to calls from his coach at Northamptonshire, Kepler Wessels, for him to be picked for England's tour of India in February. Wessels got his wish and Panesar was handed his debut at Nagpur, picking up Sachin Tendulkar as his first Test wicket, followed by Mohammad Kaif and Rahul Dravid.

His naturally attacking instincts - more often than not bowling around the wicket to right-handers - contrasted with his cherubic and unconfined celebrations at the fall of each and every wicket. Like a lamb let loose from the paddock, the effervescence he showed confirmed his insatiable hunger and love of the game. But it was during his first international home season that his special ability was confirmed, spinning England to a series win over Pakistan.

At Old Trafford he made the most of a helpful surface with eight wickets then, at Headingley, he was England's best bowler on a run-filled strip. The loop, guile and changes of pace outfoxed Pakistan's rubber-wristed top-order, including Inzamam-ul-Haq, Mohammad Yousuf and Younis Khan. In a matter of months he had elevated himself to the position of England's senior spinner, pushing aside Ashley Giles and drawing comparisons with Bishen Bedi, India's legendary left-arm tweaker. Yet Duncan Fletcher - ever the loyalist; rarely the risk-taker - preferred a rusty Giles for the first two Tests of the 2006-07 Ashes.

Monty took his chance in the third at Perth, becoming the first English spinner to take five at the WACA (and eight in the match). As England crashed to a humiliating 5-0 defeat, Panesar was one of the precious few to return home with their reputation intact, and by the end of the tour he had even broken into the World Cup squad, following his crucial role in England's CB Series victory. His performances in the Caribbean were merely steady, but he launched England's new era under Peter Moores with 23 wickets in four Tests against West Indies, and climbed in the process to No. 6 in the world rankings.

Clients often ask about purchasing books for giveaways and delegate packs. Below you’ll find a selection of products by Monty Panesar. Click the images to view on Amazon's website. For bulk orders, please speak with your Booking Agent.

How to book Monty Panesar for your event