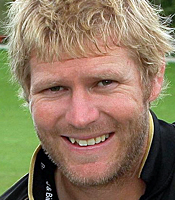 Matthew is a right arm fast-medium bowler who successfully moves the ball off the seam and has considerable control of length and line. Matthew debuted for his home county at the age of 19 in 1996 before cementing his starting position in the team in the 2000 season and has since become a regular for England.

At international level, Matthew made his debut in the thrilling Lord's Test against the West Indies in 2000. He bowled well and was rewarded with selection for the Winter Tour of Pakistan and Sri Lanka. Matthew's development was momentarily stalled as he suffered an injury-ravaged season in 2001. After taking six wickets in the second Test of the summer against Pakistan, he was sidelined for the entire Ashes series. He returned to help Yorkshire clinch the CrincInfo Championship and was England's leading wicket-taker in the one-day tour of Zimbabwe, which followed in the close season.

Matthew was selected to lead the bowling attack for the Tour of India and responded with consistency and strength taking 9-31. Later he reaped career best figures 7-63 in the first Test against New Zealand at Christchurch to help set-up England's victory, completing the series with 17 wickets.

In 2002 Matthew was the only England bowler to play in every Test match of the summer, including taking seven wickets in England's victory at Edgbaston, to win the man-of-the-match award.

In the 2004 Test tour of the West Indies, Matthew helped England secure their first Test series win in the Caribbean since 1968. In the third Test Matthew celebrated becoming only the 10th ever English bowler to secure a hat-trick, reducing the West Indies from 4 for two to 45 for five, which was instrumental in England's success.

In the winter tour of South Africa Matthew was instrumental in England's victory and was named Man of the Match in the Fourth Test, as he took seven wickets as England stormed to a 77-run victory in Johannesburg. His personal match figures of 12 for 205, leading bowler in the series, duly won him a return to the England one-day squad.

Clients often ask about purchasing books for giveaways and delegate packs. Below you’ll find a selection of products by Matthew Hoggard. Click the images to view on Amazon's website. For bulk orders, please speak with your Booking Agent.

How to book Matthew Hoggard for your event