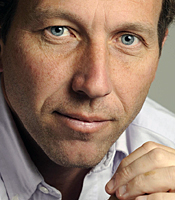 Mike Atherton has captained England at all levels including full Test side. His rise through the Combined Universities team saw Mike capped for England before he was awarded his county cap.

Mike Atherton is the youngest Lancastrian to score a Test century, and won great admiration for his handling of the media and his capacity as a leader in the young England side which toured the West Indies in 1994, and Australia and South Africa in 1995.

The responsibilities of captaincy sat well with Mike, and his batting average rose from 34 to 57 and Mike formed the bedrock of England's four successive Test series successes in 2000/2001 against South Africa, West Indies, Pakistan and Sri Lanka. Mike retired from cricket at the end of the 2001 season.

As a Cambridge graduate, Mike Atherton's career has been extended into the media and in the national press. Away from cricket Mike's hobbies include golf (handicap of 8), travel, reading and the theatre.

Clients often ask about purchasing books for giveaways and delegate packs. Below you’ll find a selection of products by Mike Atherton. Click the images to view on Amazon's website. For bulk orders, please speak with your Booking Agent.

How to book Mike Atherton for your event