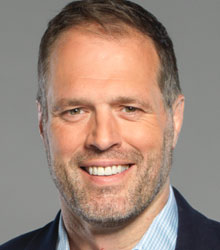 At 6'10" Martin Bayfield, an ex-policeman, was one of the tallest players in rugby - a stat he used to full advantage as one of England's most potent forwards. On the field Martin enjoyed a successful international career, winning 31 England caps and two Grand Slams as well as being selected to represent the British Lions in New Zealand.

Injury prematurely ended Martin's rugby playing but his charismatic personality and natural flair for commanding a room led him to take centre-stage at corporate events and prestigious functions. Martin is now a popular after-dinner speaker, MC and auctioneer, famed for his exceptionally funny speeches. He is now rightly in huge demand for a range of corporate events including gala and sports dinners, award ceremonies, company conferences and away-days.

Since retirement Martin has equally moved seamlessly into broadcasting - commentating for the BBC and Radio 5 Live, hosting Five's NFL coverage as well as The World's Strongest Man and most recently covering the Rugby World Cup 2011 for ITV. In March 2012, Martin was confirmed as a regular presenter on BBC1's long-running Crimewatch, thus cementing his reputation as an accomplished and trusted studio presenter.

Martin also made regular appearances as a guest panelist on Channel 5’s 'The Wright Stuff' and joined BT Sport in a number of roles acting as a reporter, co-presenter and rugby expert across the channels' rugby coverage.

Possibly Martin's most famous achievement to date is his involvement in the Harry Potter films, where he played Robbie Coltrane's body double as the giant Rubeus Hagrid. A role in BBC1's much-loved series New Tricks followed and 2012 sees another exciting development in Martin's burgeoning media career.

With a charismatic personality and natural flair for commanding a room, Martin Bayfield is a popular raconteur and after-dinner speaker, MC and auctioneer, famed for his exceptionally funny speeches.

An excellent motivator, at a mere 6” 10” Martin Bayfield is a presence in every sense of the word - whether speaking or not - and is, without doubt, one of the “biggest” names on the after dinner circuit.

We were once again very pleased with Martin Bayfield. He was engaging, entertaining and managed to hold the attention of over 1,700 guests throughout the evening. He even managed very well with Keith Lemon running wild on stage!

As ever, the feedback on Martin Bayfield was superb. This is the third year he has done the event and he is now very much a part of it. We really enjoy working with him and please do pass on our thanks to him

Really engaged the audience and was very funny and professional.

Martin Bayfield was entertaining, motivational, and frank regarding the challenges faced by the corporation. Employees were sending in complimentary emails days after the event. We are very happy with the response we received.

I would like to personally thank Martin Bayfield for being such a wonderful guest speaker and auctioneer at our event. Our guests thoroughly enjoyed the evening and are recalling Martin's hilarious tales.

How to book Martin Bayfield for your event