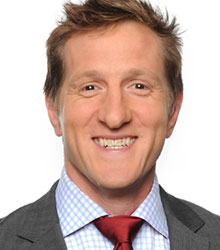 Book Will Greenwood MBE
add to shortlist
About

Some senior citizens may think that at 6 foot 4 inches and over 15 stones this chap should be in the second row! We can only presume that his dad Dick knew better and made sure that Will grew up with plenty of pace.

Will Greenwood is one of England's greatest ever rugby players as well as one of the sport's most engaging, intelligent, outspoken and witty characters.

1992 saw him at stand off for Durham University and Waterloo, and touring Australia with England under 21 in 1993 and the A team in 1995. By now he was at the Harlequins and playing in the centre, moving to Leicester in July 1996. The following year after many games for England A he was selected for the British Lions tour of South Africa.

After 6 games he was badly injured at Bloemfontein and had to return home early with a serious head injury. By November he was sufficiently recovered to gain his first England cap against Australia.

Amassing a total of 55 caps, Will announced his retirement to Rugby in 2006 and is now an analyst on Sky Sports, giving his own insight on the Rugby coverage. In 2007, ITV Sport signed up Will to be one of their Rugby Experts during their coverage of the Rugby World Cup. He has also become a writer for The Daily Telegraph's sports coverage.

Will Greenwood’s keynote presentations on business are as incisive and thought-provoking as those in relation to his rugby career and the attributes required to perform in both professional arenas are central to his delivery of such talks, focusing on leadership, motivation and teamwork - themes that resonate across both careers.

Clients often ask about purchasing books for giveaways and delegate packs. Below you’ll find a selection of products by Will Greenwood MBE. Click the images to view on Amazon's website. For bulk orders, please speak with your Booking Agent.

How to book Will Greenwood MBE for your event

Tags for Will Greenwood MBE