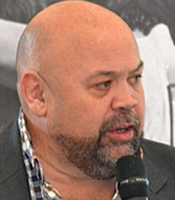 Gareth “Cooch” Chilcott got his introduction to rugby when he was 11 years old and started playing at Senior School. He joined Bristol's ‘Old Redcliffians' junior team for whom he played for 3 years. Gareth's natural talent wasn't overlooked for long, and he joined the Bath rugby team in 1976. Together with players of the calibre of Jon Hall, Stuart Barnes, Andy Robinson and Jeremy Guscott, he helped make Bath the dominant force in English rugby in the 1980s.

Gareth played in excess of 400 first team games for Bath, along with being an English International player between 1984-1990 and coming up against Australia with the British Lions in 1989.

With his famous headband and trademark moustache, Gareth has always been recognised as one of the game's true characters. His extremely funny rugby anecdotes and stories have been enjoyed at private and corporate events all around the world.

Gareth is now recognised as a leading rugby pundit and one of the UK's most entertaining rugby speakers. His motivational tone and humorous anecdotes are sure to entertain any audience.

Gareth Chilcott is a hugely engaging speaker who can delivers very amusing and entertaining talks about his Rugby career, from the days when he used to play as well as his time spent as a media pundit.

He also give motivational talks using his career as an example and can inspire all sorts of people from all walks of life. A real character, Gareth’s talks will always make you laugh.

Clients often ask about purchasing books for giveaways and delegate packs. Below you’ll find a selection of products by Gareth Chilcott. Click the images to view on Amazon's website. For bulk orders, please speak with your Booking Agent.

How to book Gareth Chilcott for your event