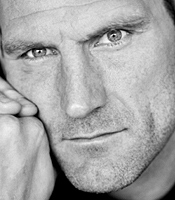 Lawrence Dallaglio was born in London, 1972 and educated at Ampleforth College where he was first spotted by Wasps while playing for the college at the Rosslyn Park 7's in 1989. He joined Wasps in 1990, becoming Captain in the '95-'96 season when he was also voted the RFU's Player of the Year.

Lawrence was a member of the triumphant England 7's team, which won the World Cup at Murrayfield in 1993 and has represented his country at every level - Colts, Under 21, Student, 'A' team and 1st XV. He won his first cap for the full England team when coming on as a replacement against South Africa at Twickenham in 1995. He now has 73 caps and in October 1997 became England Captain for two years.

Lawrence Dallaglio captained Wasps to the League Championship in the first year of professionalism, with the team eventually winning by a then record margin of six points. He was many people's player of the tour whilst in South Africa with the successful 1997 British Lions and played in all three Tests.

He made five appearances for England in the '99 World Cup and was widely regarded as their best player. He played for the Barbarians on four occasions and captained them against South Africa in December 2000, at the Millenium stadium.

Lawrence was selected for the 2001 Lions' tour to Australia, but injury prevented him playing a full part, and did not feature in the tests. In the 2002/2003 season, his club Wasps won the European Parker Pen Trophy along with the Zurich Championship. Lawrence played in both tests against New Zealand and Australia in June culminating a great season with two massive performances. He then went onto being the only player to play in every minute of every match during England's successful campaign in Australia in becoming World Champions in November 2003.

Lawrence Dallaglio was awarded the MBE in the New Years Honours in 2004, and was named as England Captain for the forthcoming RBS Six Nations tournament.

How to book Lawrence Dallaglio OBE for your event