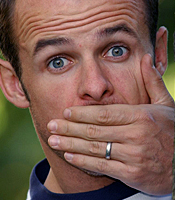 Austin Healey is one of the most highly regarded English rugby players in the modern era. Austin, who also played full-back for Leicester Tigers (with whom he won 2 European Cups), won 51 caps for England and toured with the Lions in 1997 and 2001.

Since retiring from playing rugby, Austin has worked as a successful banker for Credit Suisse and has been a popular pundit and commentator for the BBC and Sky.

In 2008, Austin partnered with Erin Boag on Strictly Come Dancing, where he gained huge praise from the judges for his dancing skills and huge love from the women for his see-through shirts. In Austin's first show head judge Len Goodman said "That was the best first dance for a man I have ever seen"

In February 2009, Austin took on the challenge of turning around the fortunes of 5 struggling rugby clubs as part of the ground-breaking, ad funded programme; The Big Tackle for ITV. Austin brokered the deal with O2 and hosted the show using all the experience he had gained from his prolific rugby career. The show was an outstanding success and discussions are currently taking place for a second series. In June 2009, it was announced that Austin Healey was joining the primetime Saturday night BBC1 entertainment show Hole in the Wall - a series that regularly exceeds 6 million viewers.

Austin put his dancing shoes back on and took to the road in 2010 as part of part of the Strictly Come Dancing Live Tour wowing audiences in arenas across the country and winning over 30 of the of the 45 shows. Austin lives in Leicestershire with his wife Louise and four daughters.

Austin Healey was first class and I had many complimentary comments. He was very co-operative and helped in ensuring a successful event.

Rotary Club of the Nene Valley.

Clients often ask about purchasing books for giveaways and delegate packs. Below you’ll find a selection of products by Austin Healey. Click the images to view on Amazon's website. For bulk orders, please speak with your Booking Agent.

How to book Austin Healey for your event