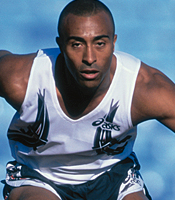 Without a doubt one of the greatest athletes that Great Britain has ever produced, Colin Jackson called time on his outstanding athletics career in front of an adoring home crowd at the World Indoor Championships in Birmingham in 2003. After more than a decade spent at the very pinnacle of his sport, it was a fitting end to a glittering career.

On retirement, Colin Jackson was a natural choice to become one of the key members of the BBC's sports production team and he continues to cover all of their Athletics output as a BBC pundit and presenter. Covering the Athens Olympics was obviously a highlight early in his broadcasting career and since then he has been an integral part of the BBC output for the 2006 Torino Winter Olympics and European championships as well as most recently, the 2008 Beijing Olympics

Colin co hosted the BBC1 live morning show Sunday Life for it's duration during 2008. He is a regular reporter for The One Show (BBC1) and recently filmed The Truth About You (BBC1) a documentary looking at the science behind his body, brain and success. He also traced his roots in a moving episode of BBC1's highly acclaimed, Who Do You Think You Are. He dazzled us all with his dancing skills on Strictly Come Dancing and was thrilled to make it, by public vote, into the final. More recently Colin has appeared on ITV1′s Dancing on Ice Goes Gold.

Colin is the Patron of Fairbridge Cymru and works closely with Sport Relief, where he is a member of the steering panel and is also an International Inspiration Ambassador for UNICEF.

Between 2004 and 2012 he also worked extensively with BBC Wales' award-nominated sport website Raise your Game, which encouraged children to be ambitious in sport and life in general. In 2012 Colin also launched the Red Shoes Academy, in partnership with the Welsh Government department of Education and Skills, leading a group of elite sport ambassadors in Wales to visit schools and colleges and inspire and motivate the next generation.

Colin Jackson's personable, yet professional approach, combined with his high profile, mean that he is in constant demand from the commercial sector. In line with his on screen presenting and commentary Colin is a confident and charismatic conference/awards host and a high level motivational speaker.

With an unprecedented competitive career behind him coupled with his fresh-faced charm and friendly warmth he has been extremely well received by numerous audiences including IT Conventions and Business Forums.

We are really pleased with the way the event went. Colin was excellent with regards to customer and council member interaction, having a go on the new gym kit and with the speech he made when cutting the ribbon. All in all we are very pleased that we chose Colin and that he was pleased to accept the invitation. I would definitely recommend him if asked.

Clients often ask about purchasing books for giveaways and delegate packs. Below you’ll find a selection of products by Colin Jackson CBE. Click the images to view on Amazon's website. For bulk orders, please speak with your Booking Agent.

How to book Colin Jackson CBE for your event