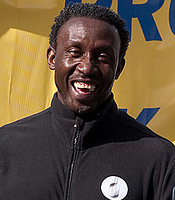 Undoubtedly Europe's greatest ever 100m sprinter, Linford became the Olympic 100m Champion after winning the Gold Medal in Barcelona, 1992. In an International career spanning seventeen years, Linford competed over 60 times for his country and won more major championship medals, 23, than any other British sprinter.

Linford is the only British athlete to have won Gold medals in the 100 metres at all four major competitions and was the firstEuropean to have runsub ten seconds. His fastest time 9.87 seconds, recorded when he won the 1993 World Championship in Stuttgart, is the European record.

Amongst the numerous awards bestowed upon Linford was the prestigious 1993 'BBC Sports Personality of the Year' and 'European Athlete of the Year'. Linford's a familiar face on television, having presented three series of 'Linford's Record Breakers' on BBC1 and 'Garden Invaders' amongst others. He has worked as a technical commentator in Athletics and has presented many sports specific programmes over the years.

Linford's success in Athletics has continued since his retirement in a coaching role, having coached a number of top British athletes to success, including Olympic medals for both Darren Campbell and Katherine Merry. He has coached some of Britain's leading international athletes including Olympic Champion Mark Lewis Francis, Commonwealth Gold Medalist Laura Turner, World Championships Bronze medallist Conrad Williams, and European U23 400m Champion Nigel Levine.

Linford and his protégé, Darren Campbell, launched Street Athletics in June 2005 in conjunction with Manchester City Council, in an attempt to find the raw sprinting talent that is being lost to other sports and computer games. The scheme was extended to cover 4 cities in 2006. Since 2005 the project has grown and become more successful, visiting its greatest amount of venues, 22, in 2009.

Clients often ask about purchasing books for giveaways and delegate packs. Below you’ll find a selection of products by Linford Christie OBE. Click the images to view on Amazon's website. For bulk orders, please speak with your Booking Agent.

How to book Linford Christie OBE for your event