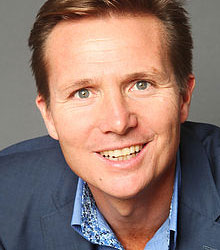 Roger Black is one of the country's most successful sportsmen having represented Great Britain for fourteen years at the highest level in the world of athletics.

Born in Portsmouth, Roger was educated at Portsmouth Grammar School and subsequently went on to read medicine at Southampton University. He is particularly admired for his triumphs over adversity, overcoming serious injuries and a rare heart valve condition to go on to become a world champion.

Roger Black won fifteen major Championship Medals including European, Commonwealth and World Championship Gold Medals. His greatest achievements were winning the Olympic 400 metres Silver Medal in 1996 and being part of the Gold Medal winning 4 x 400 metres relay team at both the 1991 and 1997 World Championships. He was British Men's Team Captain and was awarded the M.B.E. in 1992.

He regularly appears on prime-time television, programmes include; A Question of Sport, They Think It's All Over, Strictly Come Dancing, Celebrity Master Chef and GMTV. He co-presented a series of BBC technology programme Tomorrow's World and four series of the BBC's award winning City Hospital. Other shows include SUPERSTARS and Celebrity Mastermind.

With his deep rooted understanding of motivation, endurance and self-development Roger Black will inspire, motivate and create an individuals awareness of self-achievement. He is one of those unique individuals who has achieved both individually and as part of a team. He understands the dynamics of becoming a champion - how to dream a dream, set goals and take the necessary steps to fulfilling ones potential.

By combining his close understanding of motivation and self-development with his personal experiences both on and off the track he consistently inspires, motivates and entertains audiences throughout the country.

Motivational Keynote Speech Roger Black’s standard speech is designed to engage the audience in the lessons learnt throughout his athletics career, which resulted in him achieving his dream of standing on the Olympic rostrum in Atlanta in 1996. Audience members can also reflect and learn from the performance lessons of Team GB, who delivered on the greatest stage of all - the London 2012 Olympic Games

The fundamentals for success change very little but the challenge for most businesses, whether large or small, is to find a way to communicate the key corporate messages in an appropriate way. If Roger Black’s speeches compliment or reinforce your company message then a great opportunity is created for the audience to move ahead with a shared vision.

Roger’s particular areas of interest are: • The space between talent and performance, the attitude and behaviours of  world class performers • The balance between individual and team success.

After Dinner Speeches Roger Black MBE presents a blend of anecdotes from the world of first class athletics, with a motivational theme. Slightly shorter speech than a keynote presentation, but more suited to the occasion.

In addition to presenting his motivational and after dinner speeches, Roger Black is perfectly at home hosting conferences, debates and presenting awards at corporate dinners.

Roger was absolutely brilliant, he’s the best presenter we have had. He made time for everyone and made the effort to speak to all nominees about whatever they had been nominated for. His opening address was fab. Couldn’t recommend him more!

Thank you for hosting our leadership conference - everybody thought your contribution was outstanding. The conference was an overwhelming success; all the messages we wished to put across were delivered and more importantly, absorbed by delegates

Your presentation on Saturday was superb! The great thing was that it seemed to strike a chord with everyone there, which is no mean feat considering the diverse range of ages and interests present.

We have quarterly events and the majority of the feedback has been that Roger is the best speaker we have had!

The feedback has been fantastic. You managed to be both entertaining and highly relevant - no mean achievement given we had around 45 nationalities represented!

Thank you again from giving such superb motivational and team building presentations at our Region North Institutes this year. Comments from delegates include 'Outstanding!', 'Fantastic', 'Excellent motivational talk' and 'This hit the right note - very good presentation'. Very relevant.

Clients often ask about purchasing books for giveaways and delegate packs. Below you’ll find a selection of products by Roger Black MBE. Click the images to view on Amazon's website. For bulk orders, please speak with your Booking Agent.

How to book Roger Black MBE for your event