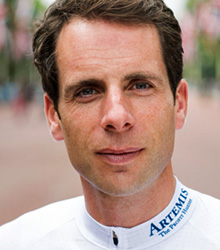 A truly inspirational speaker, Mark Beaumont is a record-breaking round-the-world cyclist and ultra endurance adventurer. He first appeared on our TV screens in 2008 with the BBC1 BAFTA-nominated documentary series The Man Who Cycled the World, telling the inside story of his extraordinary 18,000-mile round-the-world bike race, where he smashed the previous Guinness World Record by a staggering 82 days.

To qualify for the World Record Mark was required to travel a route that passed through two approximately antipodal points. The route began and ended in Paris, riding through 20 countries across Europe, the Middle East, India, Asia, Australasia and North America. He endured many hardships during the voyage. In Louisiana, USA, he was involved in a collision with a car and then robbed later the same day, and elsewhere he struggled with illnesses such as dysentery.

Just a year later, Mark set out on his second ultra-endurance expedition, travelling the length of the Rockies and the Andes — cycling 13,080 miles (21,050km) in 268 days from Anchorage, Alaska to Ushuaia in Southern Argentina and climbing the highest peaks of North and South America. Mark's journey was again captured for a BBC1 documentary series, The Man Who Cycled the Americas.

Mark grew up on a farm in Perthshire, Scotland and, having been home-schooled by his mother until the age of 11, he was then educated at the High School of Dundee. At the age of 12 he cycled across Scotland, and by the time he was 15 he had pedalled his way from John O'Groats to Land's End. Mark then went on to gain a degree in politics from the University of Glasgow.

Off the bike, Mark has also been involved in two major ocean rowing expeditions. In 2011, he joined a team of six in a historic row through the Canadian Arctic, as BBC cameraman and presenter for Rowing the Arctic as well as on the oars. Their aim was to reach a former location of the North Magnetic Pole. Early in 2012 Mark joined another team to break the world record for rowing across the Atlantic. They were 27 days and over 2,000 miles into the expedition when disaster struck; they capsized and had to be rescued.

In 2015, he achieved another World Record when he cycled 6,718 miles the length of Africa, solo, in just 41 days, 10 hours and 22 minutes, destroying the previous record.

In July 2017, Mark again smashed the World Record for circumnavigation with a quest to cycle Around The World in 80 Days. Not only did he succeed and set a brand new Guinness World Record, but he completed the challenge in an incredible 78 days, 14 hours and 40 minutes!

In the 2018 New Year Honours, Mark was awarded the British Empire Medal (BEM) for services to sport, broadcasting and charity.

Mark Beaumont's story is a personal roller-coaster of mental and physical endurance as well as a fascinating insight into the world in which we live.

He is an accomplished and sought-after motivational speaker, passionate about sharing his story and providing audiences with fascinating insight into his experiences of planning and executing two successful expeditions.

Having held Ambassadorial roles with companies for the last decade, and delivering over 100 national and international speaking engagements annually, Mark talks in detail and with great insight and clarity on motivation, team management, leadership, logistical planning, achieving your goals, risk assessment and successful project management.

Whether engaged as a keynote motivational speaker or in a business-mentoring role, Mark thrives on breaking down his blueprint for success in a way that helps teams and individuals. Accessible, modest, but always inspiring, is Mark’s style of communication.

Mark was fantastic. He was our most highly rated speaker and his presentation was inspiring and genuine with real practical takeaways for everyone. Mindset is such an important part of success and our group were delighted to hear Mark’s insights on the thinking and the strategic planning behind world class performance. I’d highly recommend Mark as a speaker and he was a pleasure to work with.

Mark Beaumont is, quite simply, incredible. His phenomenal strength, courage and determination to complete such monumental challenges is, of course, the ticket-selling angle - and that in itself is quite remarkable. Beyond that, however, Mark’s professionalism, and that of the teams who work with him, reaches the standards that, as a venue, we can only wish would be displayed by all we encounter.

The highlight of our conference... very inspiring... a real pleasure to work with.

Clients often ask about purchasing books for giveaways and delegate packs. Below you’ll find a selection of products by Mark Beaumont BEM. Click the images to view on Amazon's website. For bulk orders, please speak with your Booking Agent.

How to book Mark Beaumont BEM for your event