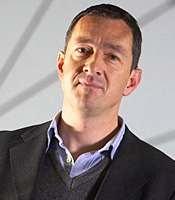 Chris Boardman's name first sprang into the public eye when he took Britain's opening Gold medal at the 1992 Barcelona Olympics astride the infamous Lotus bike. This was also Britain's first cycling gold medal in 72 years.

The iconic image of the Lotus machine and pointy helmet linked Chris forever with cutting edge technology, something he later went on to reinforce by leading the R&D team for GB Cycling in the run up to Beijing, where they became the most successful British sporting team of all time.

Post-cycling Chris Boardman went on to establish a name in journalism writing for various publications, including Diver Magazine and Pro Cycling, worked as a commentator for ITV and the BBC covering major cycling events, sat on the National Cycling Strategy Board as well as co-founding Boardman Bikes, the most respected and fastest growing British Bike Brand in decades.

Although bikes and cycling still plays a large part in Chris's life, his other pursuits include writing, running, archery and cave diving... but not all at the same time!

Chris Boardman MBE is available for a variety of talks, workshops and lectures. Here is an insight into some of the subjects...

BELIEFS
Self first - The only thing we can truly control is ourselves, everything else is varying degrees of influence.
Listening - The most important thing we can do is to take the time to truly understand before acting.
Team - Diversity in views, character and background are key to a team achieving its optimum outcome. Such entities are seldom harmonious but are worth the struggle!

CURRENT TALKS
Talks / workshops that cover many of the above themes include:
Surviving Success - A personal journey from the dole to high performance sport and business. Learning how to learn, dealing with fears and harnessing failure.
Greeks, Geeks, Triumphs and Turbulence - The story of the secret squirrel club, the least secret organisation in the world (page 1 Google) a high performing team who helped propel the GB Cyclists to unprecedented success in Beijing.

Chris was great to work with - he took the time to really get to grips with the brief and made sure his presentation not only met but exceeded the brief. We received great feedback from delegates who found Chris especially insightful and inspiring.

Chris Boardman spoke before an audience of 300 at our event in November 2008. He was a true professional and worked hard to tailor his speech to suit the theme of the event and the audience on the day. The result was an engaging, insightful, and informative presentation that delighted the audience and delighted us as clients as his feedback scores were some of the highest we've ever seen!

Jenny Coburn, ?What If! Innovation.

Chris proved a superb choice of keynote speaker at our seminar. We delivered on the brief in an engaging, inspirational and entertaining fashion which really helped us set the tone for the rest of the session.

Clients often ask about purchasing books for giveaways and delegate packs. Below you’ll find a selection of products by Chris Boardman MBE. Click the images to view on Amazon's website. For bulk orders, please speak with your Booking Agent.

How to book Chris Boardman MBE for your event