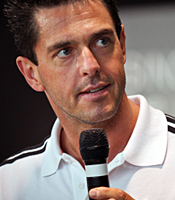 Mark Colbourne MBE is a British Paralympic cyclist and International speaker who, after breaking his back in a horrific para-gliding accident in 2009, overcame the odds to win gold and two silvers just three years later at the London 2012 Paralympic Games.

Born in November 1969, Mark grew up in Tredegar, South Wales and always dreamt of one day becoming a Professional Athlete and representing his country in a sport. His career pathway started at the age of 20 when he discovered a passion for designing and making stained glass. He had natural focus and concentration and never gave up until the job was done. Mark thoroughly enjoyed that career which lasted for almost 10 years, and then led him into a management position and then into business-to-business sales.

It wasn't until after nearly 20 years in the corporate environment that Mark Colbourne found himself living out the dream of actually being a professional athlete and training every day with the most respected sporting organisation in the world, British Cycling. It was a childhood dream for him that was coming true; however, it took a near death experience in 2009 to finally get him there!

Previously an extreme sports enthusiast until a serious paragliding crash in May 2009, when he fell 35 feet after being forced into an emergency landing, left Mark with a broken back and a permanent disability. He patiently learned to walk and cycle again, resulting in winning the Para-cycling World Track Championships in Los Angeles in February 2012. The summer of 2012 saw Mark live out his cycling dream with Paralympics GB by focusing on what he could do rather than what he couldn't do. This led him to win a Paralympic Gold Medal and Two Silver medals at the London 2012 Paralympics.

Mark's philosophy in life has always been to respect others at all times, no matter what level of lifestyle they have or what kind of language they speak. He believes we are all born happy in life but unfortunately choose to be unhappy towards what we can or cannot achieve. However, the fact of the matter is that if you give 100% at all times then you have to be content with your results, as surprisingly 101% doesn't exist! Mark says that he can think of nothing worse than giving 99% effort at something and having to then live with the disappointment for the rest of your life, knowing you didn't do your best, and giving that final 1%.

After retiring at the end of 2013, with three Paralympic medals and a World Championship gold to his name, Mark's focus has changed to helping and inspiring others to achieve their own personal goals.

Mark has four established keynote presentations to empower your audience and ensure there is significant lasting change in your business.

1. It’s Not That Bad
An impactful keynote that focuses on using the evaluation of your circumstances against how bad the situation really could be. This emotional insight in to using natural human skills can make the impossible become conquered.

2. Think Like A Champion
Goal setting is everything in a winning process. Mark shares his experiences, having spent time working alongside the ‘marginal gain’ masters and leaders in elite sport, to educate and help others to win.

3. Zero To Hero
Mark challenges any audience with this emotional keynote presentation to ensure people dig deep in to their subconscious thoughts to understand the ‘Kobler-Ross’ change curve process in more details, to gain stronger beliefs in their emotions and work towards becoming a winner.

4. Surviving Change With Mindset
Mark’s most popular and audience rewarding presentation. This emotional insight in to what it takes to survive near death and then become world class. We continue to deal with change but this thought provoking keynote explains in detail how to think logically, not emotionally, when striving towards success.

Mark Colbourne was the key speaker at our recent Corporate Values Day event where he addressed our entire work force of over 350 people. It is not only Mark's personal story that is so remarkable, it is also the dynamic way in which he makes the story and his triumph over adversity so relevant to the world of business and to every one of his audience. Many of our employees have taken the time to tell me how they found true inspiration in Mark's presentation and indeed in his positive attitude to life.

Mark gave an amazing insight into the strength of the human body and mind to overcome change. We can all take inspiration from Mark.

Having reflected on Mark Colbourne's journey I can honestly say he is a special individual and his story truly transcends sport. He made Scape's CEO forum a fantastic event and we all agreed his session made the difference.

Mark had quite clearly done his homework about the local authority and on the evening presented one of the councillors with a framed gold winner's stamp, which was a lovely touch. He was outstanding and one of the best presentations and speakers I've seen (and I've seen quite a few over the years.)

We are incredibly grateful to Mark for presenting at the Sports Awards evening on Tuesday. With the change in leadership and priorities of the school it was so important that we made this an outstanding evening. With Mark's contribution it was indeed just that. The fact that he was given a standing ovation was testament as to how good he was. The feedback from the headteacher was that Mark was the best guest speaker she had been witness too despite having a seen a considerable number over the years. To have obtained someone of Mark's calibre as the guest speaker meant the evening will live long in the memory of those fortunate to have heard Mark's story.

How to book Mark Colbourne MBE for your event