One of Great Britain's most decorated and most versatile athletes 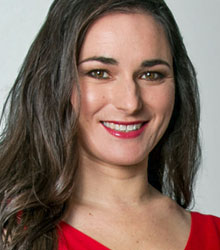 Sarah Storey is one of Great Britain's most decorated and most versatile athlete's having won World and Paralympic Gold medals for her country across two sports (swimming and cycling) and across 11 very different events (6 in the pool and 5 on a bike). In an international career that has spanned 20 years, Sarah Storey has a unique and inspiring story, not least because she has also won some of her gold as an able-bodied athlete, Great Britain's first disabled athlete to do so.

Having competed for the Great Britain Paraswim team from 1992 until 2005, Sarah found her second sport of cycling by accident. Forced out of the water for much of 2005 with a series of ear infections, much of Sarah's conditioning work that year was done on a bike and by the end of that year she had broken the world record for the Paracycling 3,000m Individual Pursuit. The decision to switch into full-time cycling was not an easy one, but since that switch Sarah has built on her solid foundation from the pool and now rides as a successful able-bodied cyclist alongside her Paracycling programme.

In 2010 Sarah competed for Team England at the Commonwealth Games, placing 6th in the Women's Indvidual Pursuit (non disabled event) and then in 2011, Sarah was a part of a highly successful GB Team Pursuit Squad who missed the 3,000m World Record by 0.188s as they claimed victory at the Manchester World Cup.

At the 2012 London Paralympic Games Sarah won an incredible four Gold Medals in both track and road cycling.

As well as her successful resume, Dame Sarah Storey OBE has battled chronic fatigue syndrome, an eating disorder, broken bones and blatant disability discrimination. She has also successfully completed a Sports Science Degree and has been a volunteer coach for over 15 years. Her philosophical view and ability to allows look for the positives from a bad situation mean her style is both refreshing and infectious.

Sarah is also passionate about the opportunities for young people in life and comes highly recommended as a mentor for young people and the challenges they face growing up. As well as public speaking Sarah has a vast experience in the media and is a popular blogger.

Dame Sarah Storey OBE is an articulate and accomplished individual, working alongside her sport as a successful and highly acclaimed public speaker. Her frank, honest and lively approach is always welcomed by her clients and she has the ability to adapt her style to suit audiences of all types, leaving them motivated and inspired to get on with the job.

Sarah’s vast presentation experience allows her to work equally at ease as a keynote conference speaker or in the classroom, she can deliver the messages required with real life examples and always with her own slant and experience. Every speech is planned specifically for the needs of each client and repeat visits can always be arranged with additional focus on any particular area of her career or experience.

The duration, content and messages from Sarah Storey's talks can be adapted to any walk of life and every audience will leave with a unique insight into the world of sport. Whether the client wishes the speech to be based around the characteristics needed to be successful, team work, handling change, adversity, illness or discrimination, to name but a few, Sarah Storey is able to deliver a speech that is right for the client and tying in with the theme's of their event.

A wonderful inspirational speech I was spellbound

Inspirational, truly magnificent, confident, assertive and challenging. She made a lasting impact!

I thought it was so powerful how Sarah lifted us up with her achievements of getting the Gold medals, then dropped us with the story of the university coach. I felt the room go "thud" with horror. Her message was so strong. She was so inspiring and the message wasn't just about equality, she also motivated people to "take charge" and follow their dreams - I felt this could be applied to all sorts of things such as having a goal at work and using personal ambition to achieve it - not sitting back and waiting for others do it for you.

Proabably one of the most engaging speakers we have used. Inspirational.

One of Great Britain's most decorated and most versatile athletes