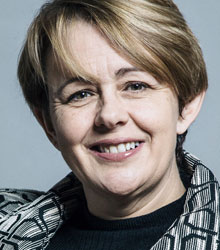 Tanni Grey-Thompson is Britain's best-known and greatest Paralympic athlete, a BBC Sports Personality of the Year and holder of the OBE and DBE. Despite being born with spina bifida, she has won 14 Paralympic medals and a whole slew of international sporting awards.

A truly remarkable woman, Tanni speaks at corporate events and dinners incisively about sporting issues and revels how she set about becoming a world-class athlete. Her presentations are moving, emotional and, above all else, incredibly inspirational as she shows audiences what it is possible to achieve if you have the drive and the motivation.

Christened 'Carys Davina', when her two-year-old sister, Sian, first sees her, she nicknamed her 'tiny', and very soon afterwards it became Tanni.

Her interest in athletics began when she was a youngster. At 15, she won the Junior National Games representing Wales in the 100m. Having performed at a world class level for the past ten years, she was a consistent medal winner in World Championships. She won her section of the woman's London Marathon four times in six years.

At the 2000 Sydney Paralympic Games, she added a brilliant four gold medals to those she accumulated in past Paralympics, winning the 800m, 400m, 200m and 100m. Overall, she has won nine gold medals, four silvers and one bronze in four different Paralympics.

Retirement has not slowed her down and Tanni has gone on to play a prominent role in public life. In 2005 she received the ultimate recognition for her incredible achievements when she was made ‘Dame’ Tanni Grey-Thompson DBE in The Queen’s New Years Honours list, for services to sport, while in 2010 she was elevated to the House of Lords as a cross-bench peer.

With a particular focus on sport, disability, health, welfare and youth development Tanni Grey-Thompson has made significant contributions to debates on welfare reform, assisted dying and sports governance.

Amongst other positions she is chair of UKactive, sits on the board of Transport for London, the board of the London Legacy Development Corporation, is a member of the BBC Independent Diversity Action Group, Chancellor of Northumbria University and is President of the National Council of Voluntary Organisations. She also acts as an ambassador for UNICEF, the Laureus Sport for Good Foundation and the sport for social change movement Beyond Sport.

During London 2012, Tanni Grey-Thompson was a key part of the BBC’s on screen team, presenting on both the Olympics and Paralympics. In the process she became the first Paralympian to commentate on Olympic sport, making the point that the emotions and experiences of elite sports people are universal across the board.

A down-to-earth person with a plucky sense of humour and real humility Tanni is an excellent speaker and is highly sought-after by organisations eager to hear her story and benefit from her inspirational message.

Baroness Tanni Grey-Thompson is an exceptional motivational and after dinner speaker who can provide bespoke tailored speeches that deliver the key messages and tone of the client’s conference needs.

She is highly experienced in delivering measurable change at board level and can relate her political, business and sporting experiences to the key issues of the day including the importance of planning for success, achieving your goals, overcoming adversity, success and failure, diversity, forward-vision and aspiration.

The ultimate crossover between high performance sport and the high powered world of business and politics, Tanni understands the parallels and has invaluable lessons from her varied career, be it perseverance, team work, adapting to change or breaking down barriers. A very strong communicator, she is brilliant at motivating and inspiring an audience, whether that is a small gathering of CEOs or a large room of employees.

Business coaching has become a growing tool for addressing development goals and organisational change, using real life challenges and experience to address leadership concerns. Leadership Mentoring is the next evolution of coaching, working primarily with individuals to further enhance their personal and professional development.

In everything that Tanni Grey-Thompson does, her lively personality and down to earth humour shines through. She is also happy to provide copies of her inspirational autobiography “Seize The Day” either for delegate packs or as part of a book signing and one-to-one Q&A session.

I wanted to email and say how incredibly inspirational Tanni Grey-Thompson was last night. The feedback has been nothing but positive and her delivery covering key issues about disability with such passion and vignettes to support was truly wonderful. Tanni was so easy to work with and accommodating of our needs. What we also loved was how humble she was given all her super achievements and peerage. Thank you as always for your support with our awards night. Time to search for our next speaker...

As a spokesperson, Tanni Grey-Thompson is relaxed, focused and absolutely at ease in front of the camera. On photo shoots and filming she is a joy to work with. As our creative teams will tell you; “When it comes to media relations, Dame Tanni is worth her weight in gold!”

The support that Tanni Grey-Thompson has provided to Vauxhall in terms of liaising with customers, raising brand awareness and generally being a real ambassador for the Vauxhall Mobility programme has been second to none. Her willingness to co-operate and ability to respond to ideas has meant that we have formed a genuine partnership with Dame Tanni. She is very much at ease in the corporate environment but is equally at home amongst prospective and existing customers at conferences or exhibitions. We look forward to continuing our relationship with Dame Tanni to raise the profile of Vauxhall Mobility still further and bring a real sense of freedom and independence to our customers.

Everyone was enthralled by Tanni Grey-Thompson, what a brilliant addition she was to our event.

Her talk was exceptional, perfectly delivered and her message was spot on.Tanni Grey-Thompson received a standing ovation, which not an easy thing to achieve at an event like this. The feedback from everyone has been fantastic.

I have never worked with any other athlete who is as brilliant as Tanni Grey-Thompson at delivering on a brief.”

Dame Tanni Grey-Thompson's presentation was outstanding. She delivered a talk that met the aims of the conference. The audience were completely engaged and hung on every word. The feedback was positive. They felt Tanni was an inspiration and felt that her comments about sport were easily transferable to education.

Tanni Grey-Thompson presented to a room of some 200 Sainsbury's colleagues. All our colleagues found her stories of her sports career both fascinating and inspiring. Her desire to succeed was obvious and certainly something to think about! Tanni took questions from the audience. Her natural, relaxed style made colleagues feel able to ask many questions across a raft of topics, not least her role on Transport for London.

Clients often ask about purchasing books for giveaways and delegate packs. Below you’ll find a selection of products by Baroness Tanni Grey-Thompson DBE. Click the images to view on Amazon's website. For bulk orders, please speak with your Booking Agent.

How to book Baroness Tanni Grey-Thompson DBE for your event

To book Baroness Tanni Grey-Thompson DBE, please submit an online enquiry, email bookings@nmp.co.uk or speak with one of our booking agents on +44 (0)1372 361 004.