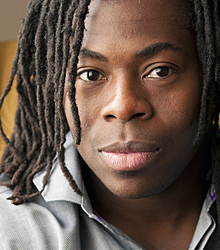 Having survived polio as a youngster, Ade Adepitan has gone on to compete as a wheelchair basketball player on an international level and is an instantly recognisable elite sports personality, having appeared in the high profile “Hip-Hop” idents for BBC1 and presented BBC's daily X-Change programme for five years.

Ade has undertaken a number of high profile public speaking engagements including the launch of the 2012 Olympic bid at the Royal Opera House alongside Tony Blair. He works extensively in the UK giving motivational speeches to schools, charities and businesses including The Royal Mail, BUPA, NSPCC, BAA, Lloyds TSB and BT.

In January 2005, Ade performed a poem with Stephen Fry detailing the plight of children with disabilities at The Holocaust Memorial in Westminster Abbey in front of the Queen and other luminaries.

Ade Adepitan represented Great Britain at the Olympics in Athens 2004, where they won Olympic Bronze and Sydney 2000, plus competing in The European Championships winning Silver and World Championships taking the Gold medal. He also commentated on wheelchair basketball for the BBC at the 2008 Beijing Paralympics.

Ade's energy and enthusiasm shines through in everything he does, making him an ideal ambassador for the NSPCC as well as a patron for Go Kids Go. Ade was an Ambassador for London's 2012 Olympic bid and now sat on the advisory board of LOCOG. He was also a consultant for Channel 4's Paralympic coverage.

Ade has since taken part in the documentary series Beyond Boundaries, in which he trekked through rain forests, deserts, rivers and mountains in Nicaragua. In one episode he pulled himself to the summit of a 5000 ft volcano - without the wheelchair.

In 2006, Ade Adepitan was given an honorary Doctorate by Loughborough University and had the honour of being awarded an MBE for his contribution to disabled sport in the Queen's 2005 Birthday Honours. Five years later, in 2010, Ade was awarded the Lifetime Achievement award from the University of East London.

In 2007, he took on the challenge of the London Marathon, which he completed in just over two and a half hours. Not one to sit on the sidelines, Ade's latest sporting passion is wheelchair tennis. He can often be seen at Roehampton early in the mornings practising his killer serve!

Surviving childhood polio has gifted Ade Adepitan with the tools to uplift his audience on subjects such as triumphing over adversity, success, peak performance and teamwork.

In his motivational speeches, Ade describes how a couple of physiotherapists spotted him in a supermarket one day and asked him if he'd like to go to the Junior Wheelchair Games. Ade was so inspired by the players he met that day, the wheelchair ceased to be an obstacle to sport.

Ade also talks about being hugely motivated by his parents' ambition in bringing him to England and opening up new possibilities. It taught him not to accept unnecessary boundaries. He often uses television as a platform to campaign against racism and disability discrimination.

Ade's energy and enthusiasm comes through in everything he does, making him an ideal motivational speaker at conferences and events.

Ade Adepitan was extremely amenable and relaxed - he gave us some fantastic quotes and a brilliant interview.

Funny, personal, raw and very emotional - there were a number of red eyes in the audience

Clients often ask about purchasing books for giveaways and delegate packs. Below you’ll find a selection of products by Ade Adepitan MBE. Click the images to view on Amazon's website. For bulk orders, please speak with your Booking Agent.

How to book Ade Adepitan MBE for your event